Summer is my favorite time of the year. I never weary of the warmer climes. It's also my favorite season to see art. The traditional summer group show’s relaxed ambiance, and pluralist ethos can provide a titillating taste of art fresh from the studio.

This new addition to the Brooklyn gallery scene is located in Park Slope. The small, but well designed storefront exhibition space has an intimate appeal, and a nice window display area. The Slope may not be the artistic beehive of Bushwick, but Krista Saunders and Jill Benton have not let that dissuade them from putting up relevant exhibits that feature under-recognized artists who deserve a look.
The Small Wonders exhibit also features small prices, and I think some of the art here could command a higher value. That said GFG’s stated mission is to introduce new collectors to affordable art, an altruistic notion that might end up paying off for everyone.
Small Wonders was a curated open call, and so contains an eclectic variety of objects and images that coincidentally coalesce in a kind of fairy tale narrative.
The four graffiti panels by Miles Wickham grab your attention immediately. Street artists do not always translate well in a white wall context, but these wonderfully vivid compacted verticals contain stacks of cryptic calligraphy that might have been created by some alien creature. They’re exotic signposts advertising a foreign realm of abstract notations. 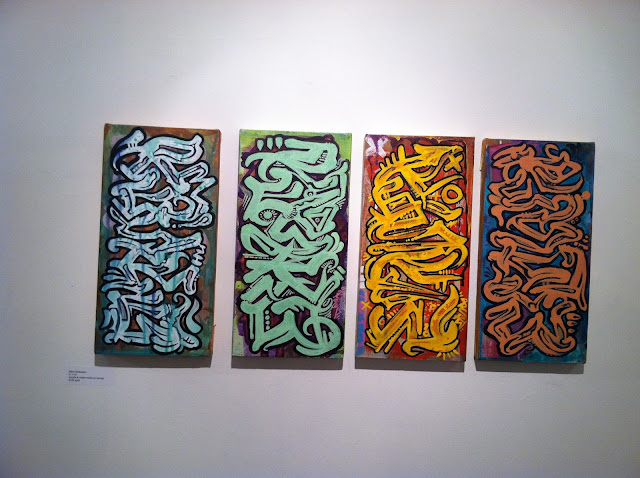 Commissioned works by Miles Wickham
Becky Yazdan’s succinctly compact compositions achieve a pleasing density, and could be seen as monoprints. 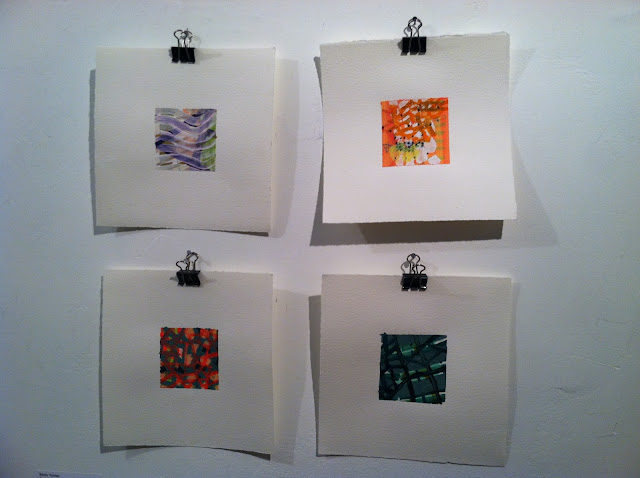 Elissa Swanger’s blotchy yet sensitive chiaroscuro conveys a minor figurative drama that invites closer scrutiny. The mottled texture brings out a nice resist effect, and harkens back to Rouault. 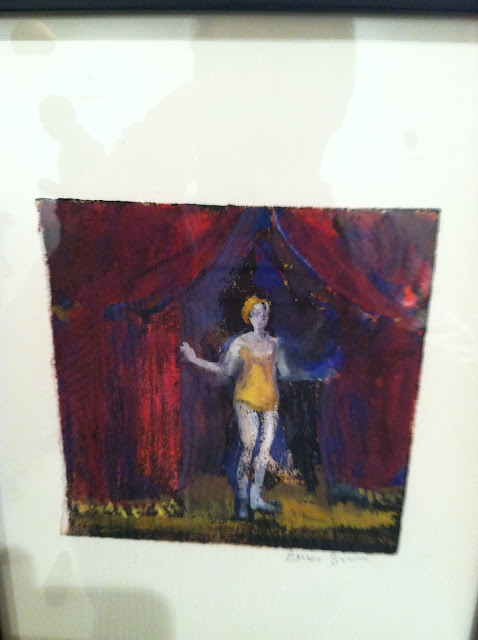 This Bushwick gallery presents a vivid array of brightly chromatic and loosely geometric works, which emphasize references to fabric design and handmade patterns that might conjure up primitivistic sources.
Margrit Lewczuk’s curvilinear symmetries incorporate a playful, Matisse-like notion of design. Their clean simplicity invokes a pleasing purity of line and color. 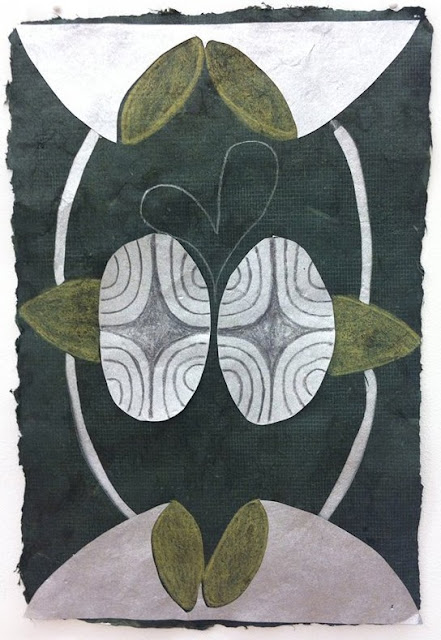 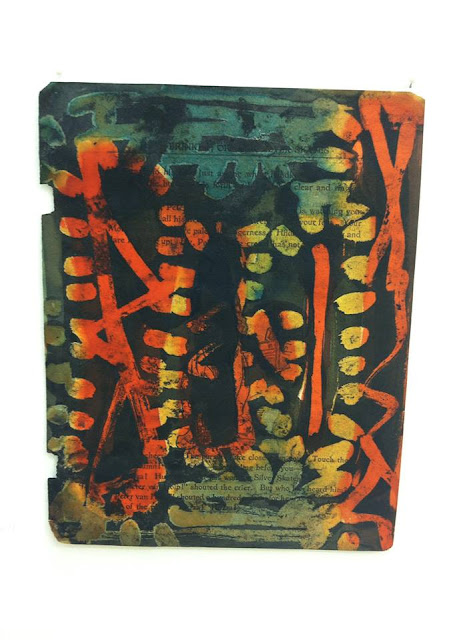 Lawrence Swan, aka “Lars” has installed one of his deceptively casual 3D pieces that establish an understated, yet compelling presence using a kind of off-hand/short hand expertise found in origami.
His budding, pinstriped flower unfolds, revealing a star-shaped stamen. This germane germination turns a mundane sheet of paper into a blooming blossom of artful modesty. 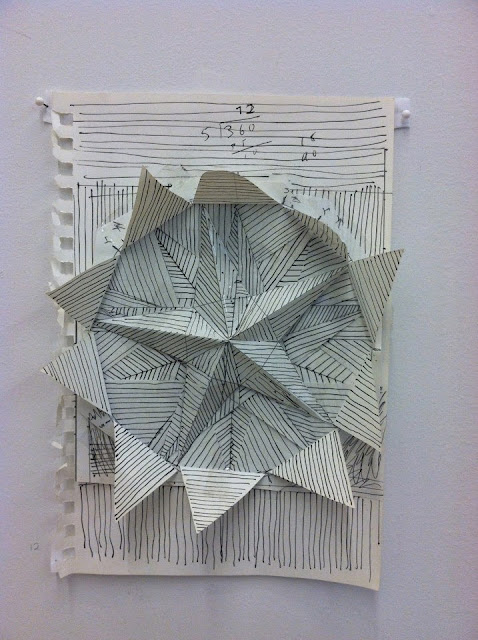 Swan’s funky and fun collage is assembled from torn squares of art paper to which the artist applied washes of color. This lively banner evokes semaphore signals, or a Klee-like compendium of kaleidoscopic quilting. 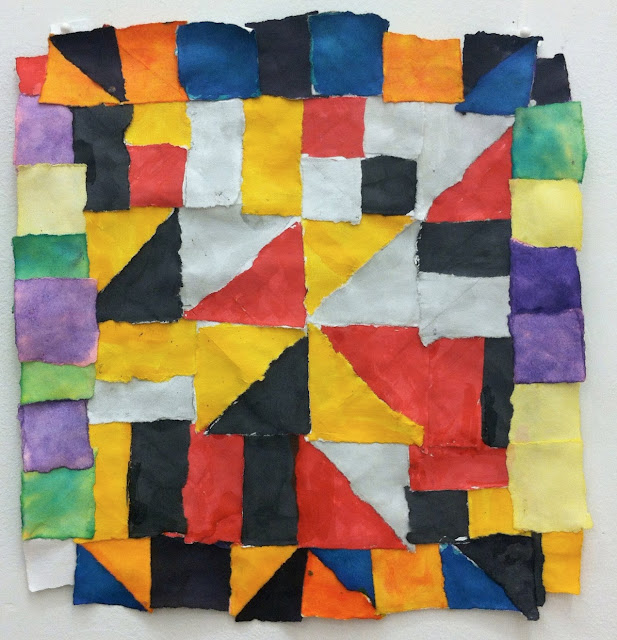 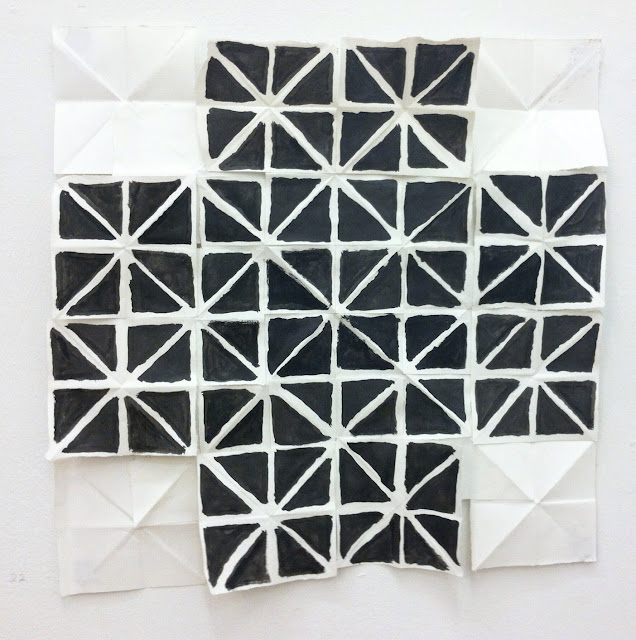 Correct me if I’m wrong, but isn’t conceptual art supposed to be a bore (yawn)?
Not when David Dixon brings his droll and scintillating gift for story telling to the fore. The art world needs more minds like Dixon’s to throw at the pressing issues of the day; such as pissing on Jackson Pollock’s grave. Indeed urination as an art medium may not be a new concept, but the artist does give new meaning to the term “streaming live”. Dixon’s novel tale is not so much a metaphor for Pollock’s painting style, as it is about misogyny and feminism.
Apparently Pollock used to go outside his studio to pee on some small rocks and pebbles. After Pollock’s death, (and internment under a large macho boulder) Lee Krasner gathered all the pissy stones from Jack’s pissoir and used them for her much more modest gravesite.
Was this a sly bit of ironic feminist commentary, or just a fond farewell gesture to the king of the chauvinist gesture?
The artist (Dixon) has not completely forsaken traditional media here, although he has upended it with this installation piece. Making a carefully reproduced 3D paper mache replica of the Pollock grave boulder (complete with bronze plaque), he somehow managed to affix the thing to the ceiling of the gallery, thereby enabling the viewer a bird’s eye view (albeit upside down). 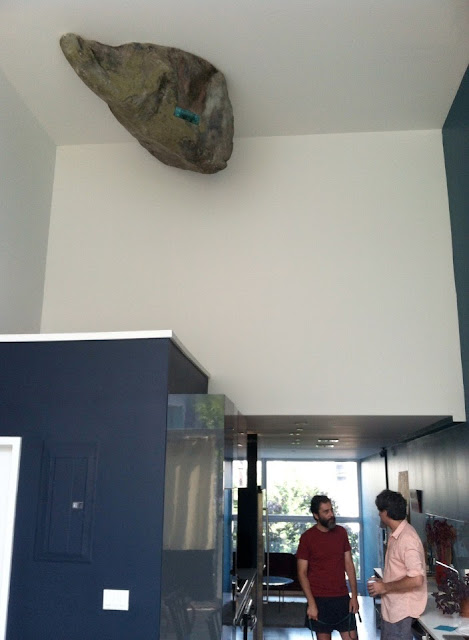 This is a typical Dixon subterfuge. He delights in reorganizing our perception and conception of events and creations we thought we knew. Dixon’s suitably ingenious "Stand-up Philoso-comedy" critique of Courbet’s “A burial At Ornans” enters into the realm of poetry slam and performance (art?), and will leave you doubting the veracity of Jansen.
To top it all off (his head that is), the artist is currently working on a post-life piece, wherein his skull will be preserved in perpetuity. Since one of my favorite art installations is the Capuchin Crypt “bone bonanza”, I’d say he might be onto something.
"What you are now we used to be; what we are now you will be..."

What took me so long you might ask. Just don’t want to be accused of favoritism. (well OK, she is my favorite)
But this does seem like a perfect opportunity to present my wife’s plein air art to the blogosphere. I also take some pride and joy in that I introduced Jeanne to painting outdoors up in Maine a few years ago. Initially she was slow to take it up, calling it the hardest thing she’d ever done as an artist.
Of course I find that hard to believe since Jeanne is one of those rare artists that have the golden touch. She was born a painter, with a nimble touch, and painterly insight.
The exhibit at Handworks prominently features Jeanne’s watercolor works on paper. Marcia Stremlau who owns the gallery, generously hung Jeanne’s work in a continuous line on the best wall.  We were very pleased. 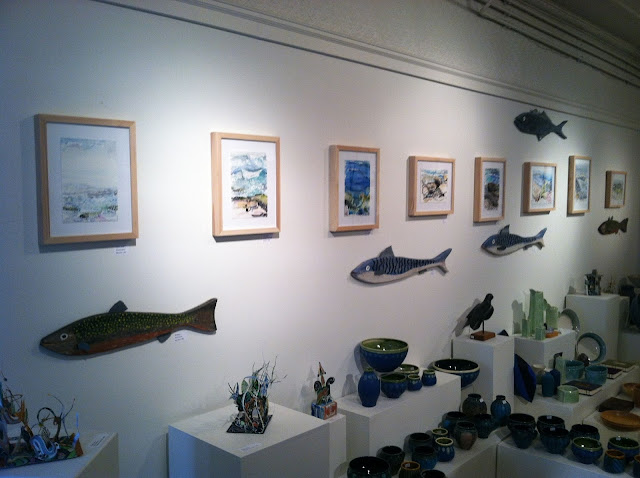 Blue Hill is an affluent Downeast enclave with a long tradition of summer arts activities that Handworks has been a part of for many years. I like the way this exhibit combines more traditional crafts with fine art. Craft is a staple of the Maine art scene, and although it might be considered gauche in NYC, the interaction of utilitarian and decorative items with more purely visual art, refreshes my eye and reminds me that this area is about the relaxed pleasures of getting away from it all.
Jeanne’s impetus for plein air is based on an intimate relationship with the foreground, featuring rock and lichen that show off her predilection for quirky, detailed line, then nuanced washes are delicately blended into a diaphanous background region of sky and ocean.

She works almost exclusively with dry watercolors from a tray, which imbue the picture plane with a pale translucency appropriate to the elusive flux of climate, light, and tide.
The trick with interpretative plein air watercolors is to find an equilibrium that encompasses a range of effects, but is contained within a specific pictorial structure. Jeanne has a knack for finding just the right combination of ingredients that bring a distinct sense of time and place to her intricate compositions.
While her studio work with oil paint could be considered an exploration of the inner nature of psychic turmoil, the plein air etudes waft dreamily towards a cathartic sensation; akin to warm basalt ledges, bathed in misty sun, and caressed by frothy surf.

This ambitious new exhibition space is located in an historic old Maine saltbox, whose previous incarnation was Judith Leighton’s gallery, one of the grand old cranky dames of the Downeast art scene.
Ms Wining’s courageous undertaking to breathe new life into the old legacy is admirable. Winnings is a transplanted New York artist herself, and CWG follows the recent Bushwick movement of artist run galleries.
She is helped by the wonderful upstairs/downstairs exhibition space architecture involved. Abundant natural light filters nicely with the artificial. Thick wood beams lend a sturdiness to the open floor plan of this spacious barn-like structure.
The inaugural show features a mix of local and New York artists whose work, though at times influenced by Maine’s landscape, avoids the coyness that can inflect regional art. Winnings is taking a leap of faith here, the tried and true formula for many Downeast area galleries is not to rely exclusively on fine art that challenges the viewer too strenuously.
CWG may end up filling a void, but the question is will local summer collectors be enough to support an endeavor who’s only mission is to present innovative visual art? I hope so.

This must be one of the Dukes’s most suave and scintillating recordings.
Billy Strayhorn’s collaboration makes everything go well, while the piano riff at the beginning and end encompass everything that makes American jazz great.

Email ThisBlogThis!Share to TwitterShare to FacebookShare to Pinterest
Posted by Eliot Markell at 3:48 PM