“Socrates SculpturePark was an abandoned riverside landfill and illegal dumpsite until 1986 when a coalition of artists  and community members, under the leadership of artist Mark di Suvero, transformed it into an open studio and  exhibition space for artists and a neighborhood park for local residents.” 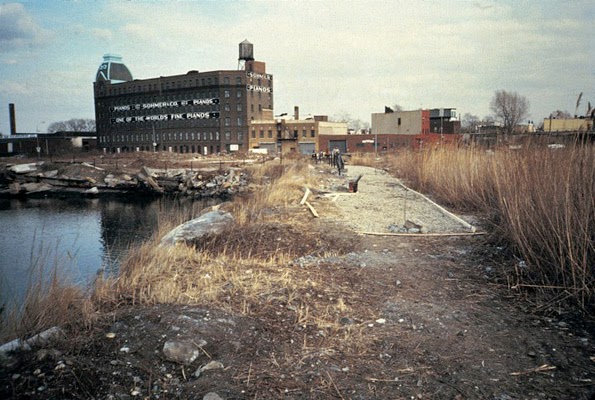 Socrates is certainly one of the more engaging art viewing destinations east of the East River. Di Suvero’s studio lot lurks large adjacent to Socrates. His massive steel sentinels peer in upon the park with an impervious, yet benevolent gaze.
A stroll through it’s relatively unimproved environs features a landscape littered with leftover remnants of industrial detritus. Yet there is an element of quietude that envelops the place. Hidden nooks and crannies are scattered about, and then the grand vista of the sprawling East River, framed by Socrates’ own little beach, contribute to a hushed contemplation at the intersection of art, architecture and nature.
Wandering about the hardscrabble grounds is always an art adventure. The eclectic nature of Socrates’ installations ranges from the overt (politically as well as visually) to the nearly invisible. (As an aside to social stratification, KennethPietrobono has interred innocuous looking plants that blend into the background scenery in his park-wide installation Selections from the Modern Landscapes.)
Celebrating a low-tech revisionist vision of colonialism, and race relations, JustinRandolph Thompson’s tour de force Brutus Jones, inspired by Paul Robison’s boisterous visage, integrates insurgent guerilla theatricality, with a fond sentimentality for the black cultural icon of quilting. 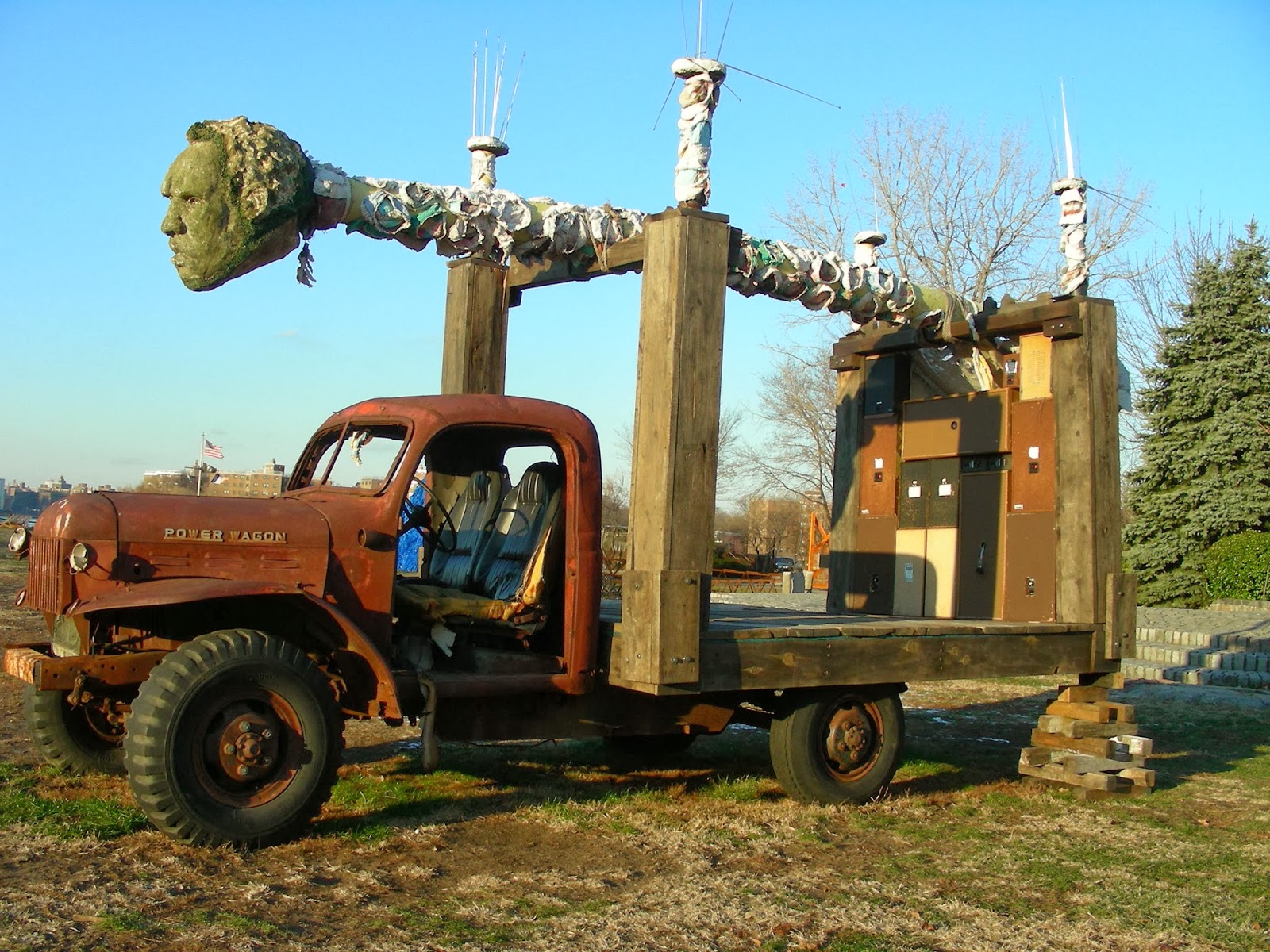 Dredging up a 1949 Dodge Power Wagon similar to one Robison used in a performance during the Peekskill riots of 1949, the artist invokes all sorts of connotations relating to black rural agrarian traditions, as well as a scathing indictment of racist intolerance.
Quilting installed under a floppy awning serves as a kind of abstract bulletin board or storefront, relating a visual throwback narrative that evokes Gees Bend gentility. 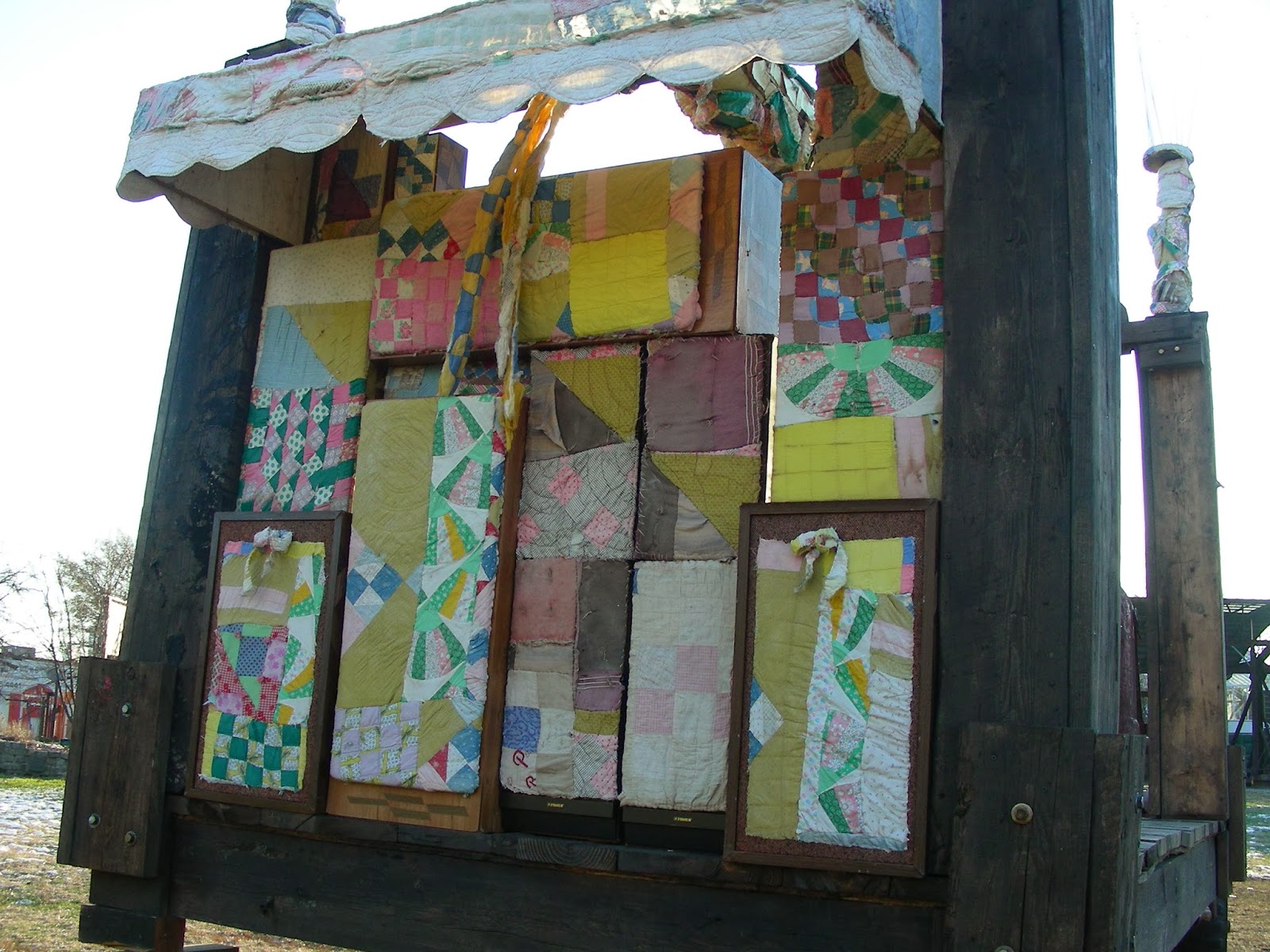 Thrusting across the ramshackle flatbed is a crossbeam based on a Roman battering ram, encrusted with quilted barnacles, and mounted with the head of Paul Robison instead of the traditional ram horns. 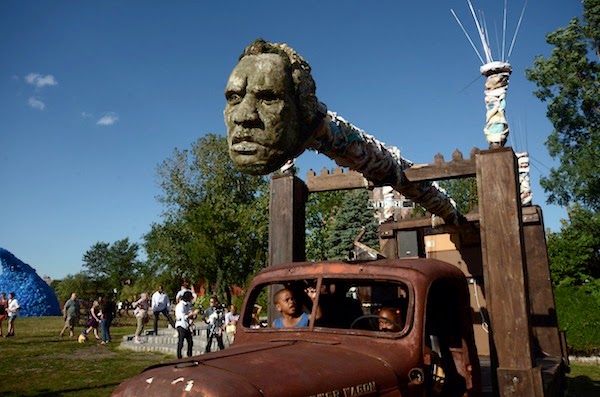 This configuration could be considered in an allegorical context. Portraying Robison’s visage as an heroic symbol may belie manipulation by Soviet propagandists, but he was indeed a champion of civil rights, and his voluptuously booming voice served as bullhorn for mid century black autonomy.
Although Thompson may have overloaded Brutus Jones with polemic, I’d think that was the point. This is art that revels in a zeal for confrontation; the artist as an impassioned ideologue wherein agenda takes priority. Perhaps if he had embedded a more literal historical narrative, viewers might have taken away a more succinct perception of Thompson’s protest.
But to his credit the artist has avoided overt agitprop, and fashioned a visually compelling sculpture as set design that morphs in and out of stridency. Brutus Jones could work perfectly well purely as an existential jungle jim on a playground derived from the artist’s psyche, and encompass a notion of cultural identity that might trump his earnest activist intent.
Thompson’s art succeeds from an aesthetic standpoint with a kind of funky outsider look, even though the artist received a formal education. His rejection of traditional art media helps sustain rebel credibility that rubs up alongside a populist pundit sensibility seen in Thompson’s predilection for performance video. His enthusiastic axing of a podium during a performance on the Power Wagon could've been an amusing reinvention of Who guitar smashing.

Yet I doubt Thompson endeavors to become an art/rock star. This underground artist seems to inhabit a nether region of the art world mostly neglected by a predominately white collector base. As such its good to see art created by one of the precious few African American descendents in the contemporary art scene.
I hope we will soon be seeing more of Thompson’s uncompromisingly entertaining commentaries on Liberté, Egalité, Fraternité.
You MyungGyun’s monumental dollop of sculpture eschews social dogma for a commentary on nature and the moment. 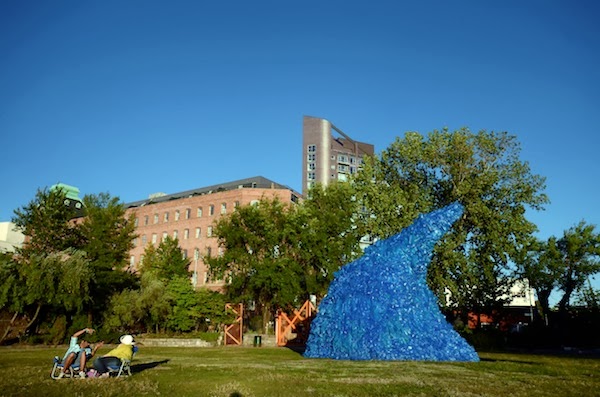 This South Korean artist joins the ranks of a burgeoning movement of Asian artists that have injected a freshness of spirit into contemporary art.
Like his compatriot Jong Il Ma’s 2008 installation at Socrates, Gyun has made a large scale sculpture that transforms its bulky architecture into an expansive ode to nature and contemplation.
Fabricated from the ubiquitous blue plastic re-cycling bag, still photos don’t capture the ethereal monochromatic flutter as the feathery plastic coat catches a breeze. The textural nuance gained from such innocuous art supplies infuses the surface with a suppleness that transcends the mass produced matériel.
The ponderous form achieves a kind of lumbering grace, perhaps the way a dinosaur would graze on the upper reaches of a tree. It’s massive frame remains connected to the ground, yet somehow gains lift, perhaps a billowy, airy blue pillow yearning for the sky. 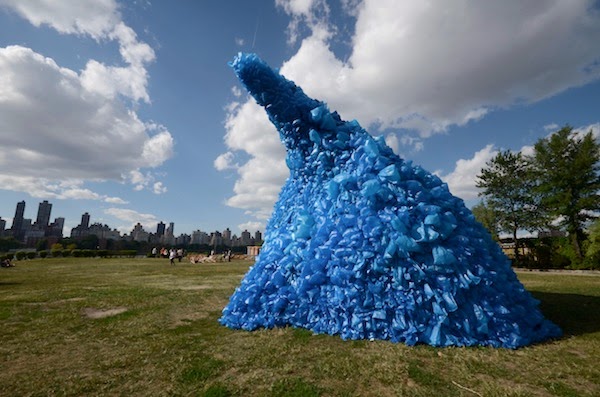 TamaraJohnson’s sly brand of humor seen in A Public Pool jolts our sense of place into a disjointed perception of where things should/could be. 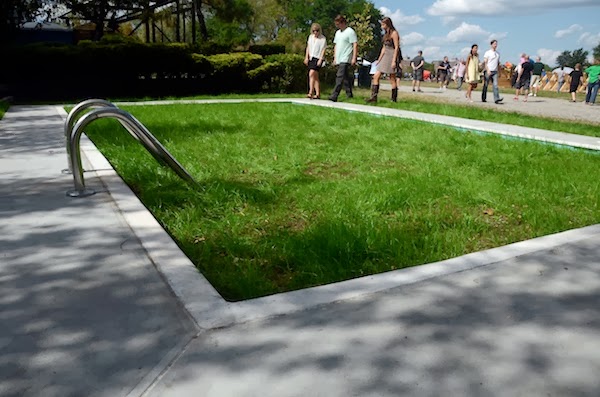 She is adept at counter-intuitive association; a pool filled with grass, density encroaching on space, or memory impeded by distraction. There could also be a sardonic poke at suburban largess; you can almost feel Dustin Hoffman’s alienated Graduate soul buried in dense layers of dirt and irony.
Johnson’s work recalls the familiar, and then alters our experience of that certain reality by distorting an expected syntax. The concept appears simple enough, but could only have been conceived in a minds eye dedicated to disruption.
Anyone up for a dip?

Aida Šehović’s Obstacle Course: Patriot Challenge offers a rousing dose of irony and could be symbolic of nationalist fervor. A native of Bosnia-Herzegovina, I’d think she knows whereof she speaks concerning the dangers of ethnic militancy.
There seems to be an interpretive intent going on, the course is set up so that viewers can undertake their own attempts at basic training. Perhaps this is a strategy to humanize the military mindset and help us appreciate the individual dedication and sacrifice of those committed to making the world a safer place.
The artist may also be expressing a cautionary morality tale concerning the risks of social conditioning and violence as a means to an end. 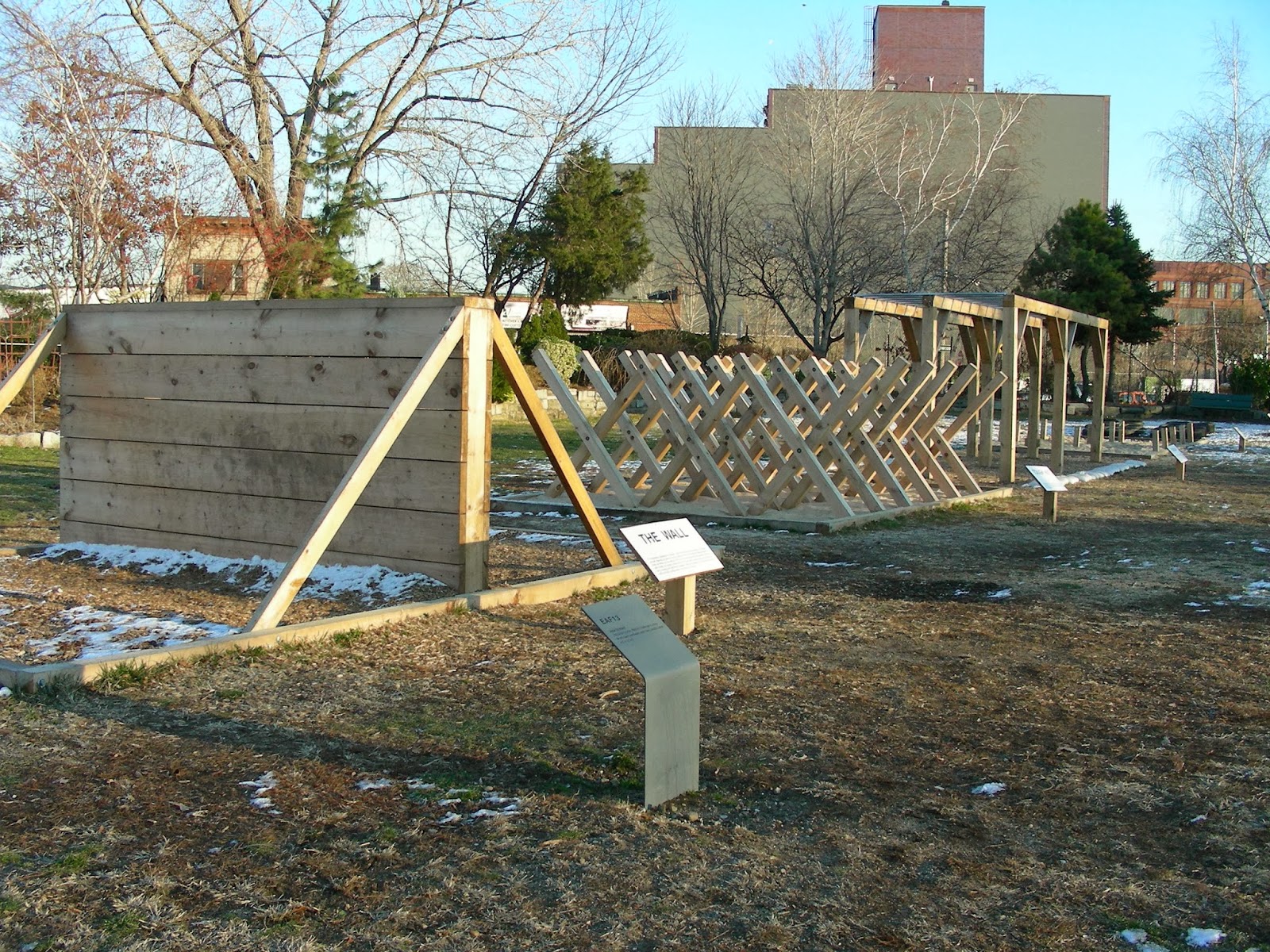 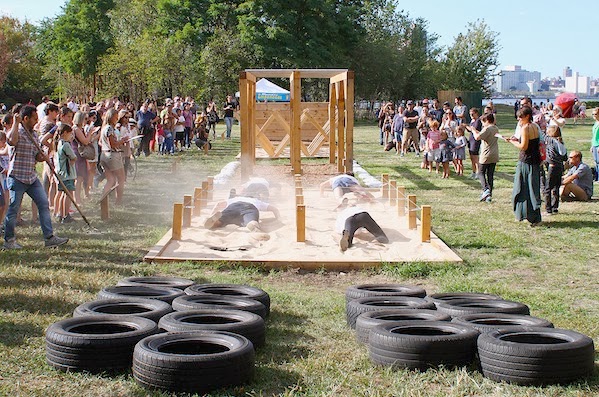 Is it surprising that Thordis Adalsteinsdottir’s woodsy ode to a love bite from nature has created such an astoundingly prudish uprising (pun intended) among the ranks of the good citizens of Queens? Or is the old adage that good fences make better neighbors at work here, or perhaps a case of out of sight, out of their minds? 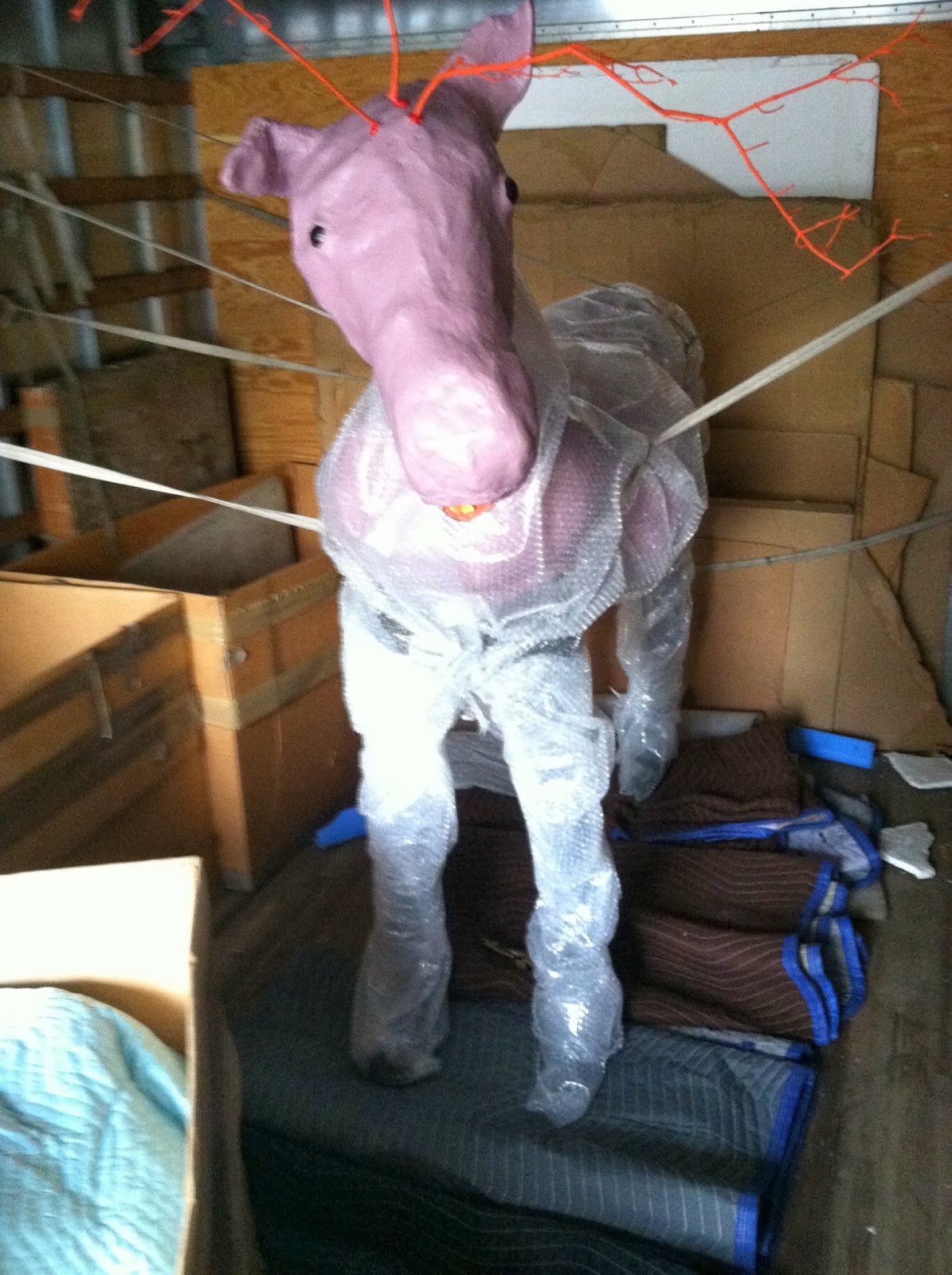 The 2013 EAF pieces are a stimulating bunch of offbeat, oddball selections that amuse as much as inspire. Socrates is probably one of the art world’s most egalitarian and eclectic exhibition venues. New York’s art exhibition hierarchy is anything but a meritocracy, so when a program like the EAF comes along that’s not all about whom you know, authenticity and diversity have a chance to thrive.
Post Script:
Speaking of diversity, another reason to visit Socrates is their semi feral cat colony. They are not too skittish, and some of them will come right up to you expecting pets. 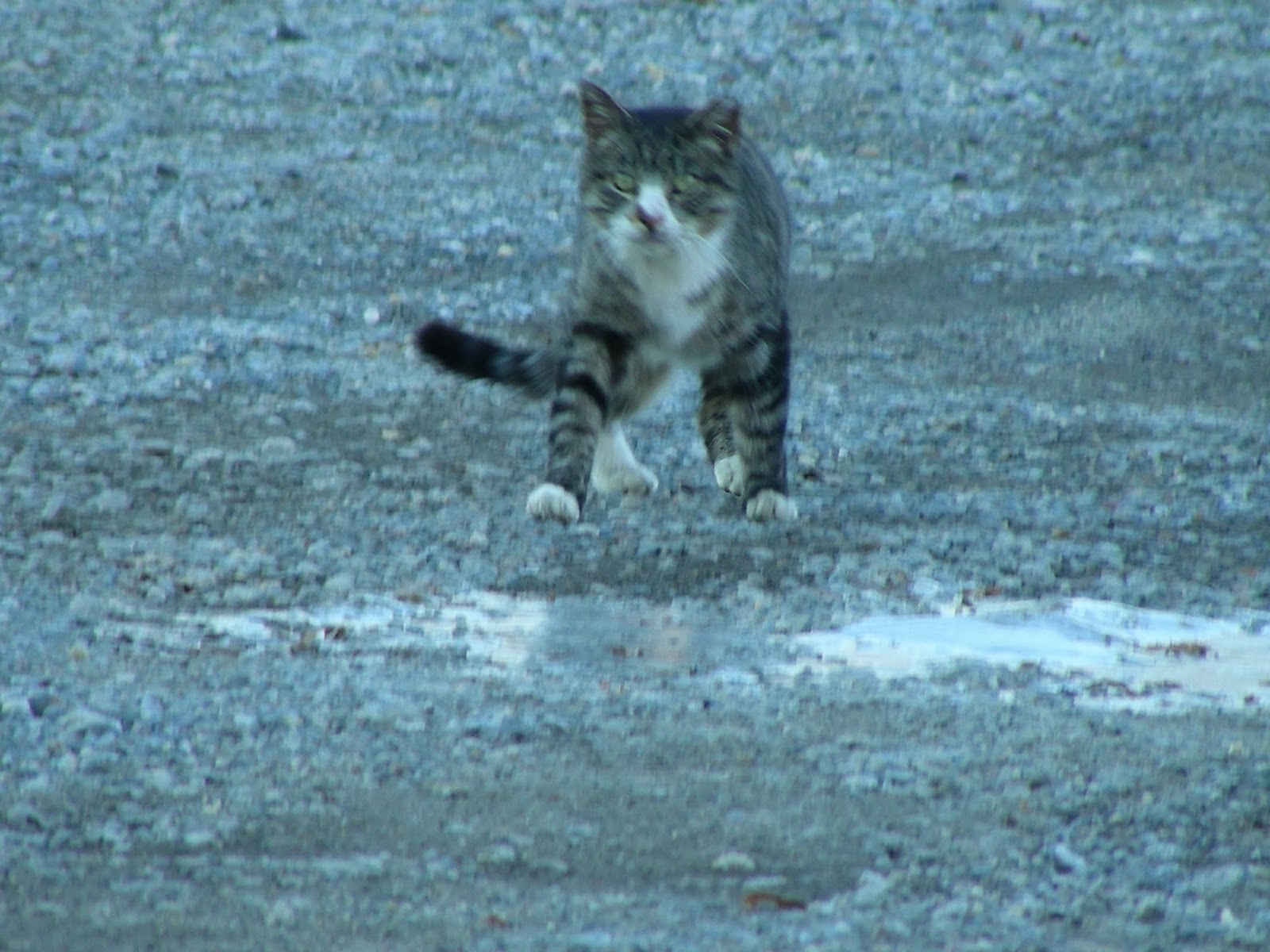 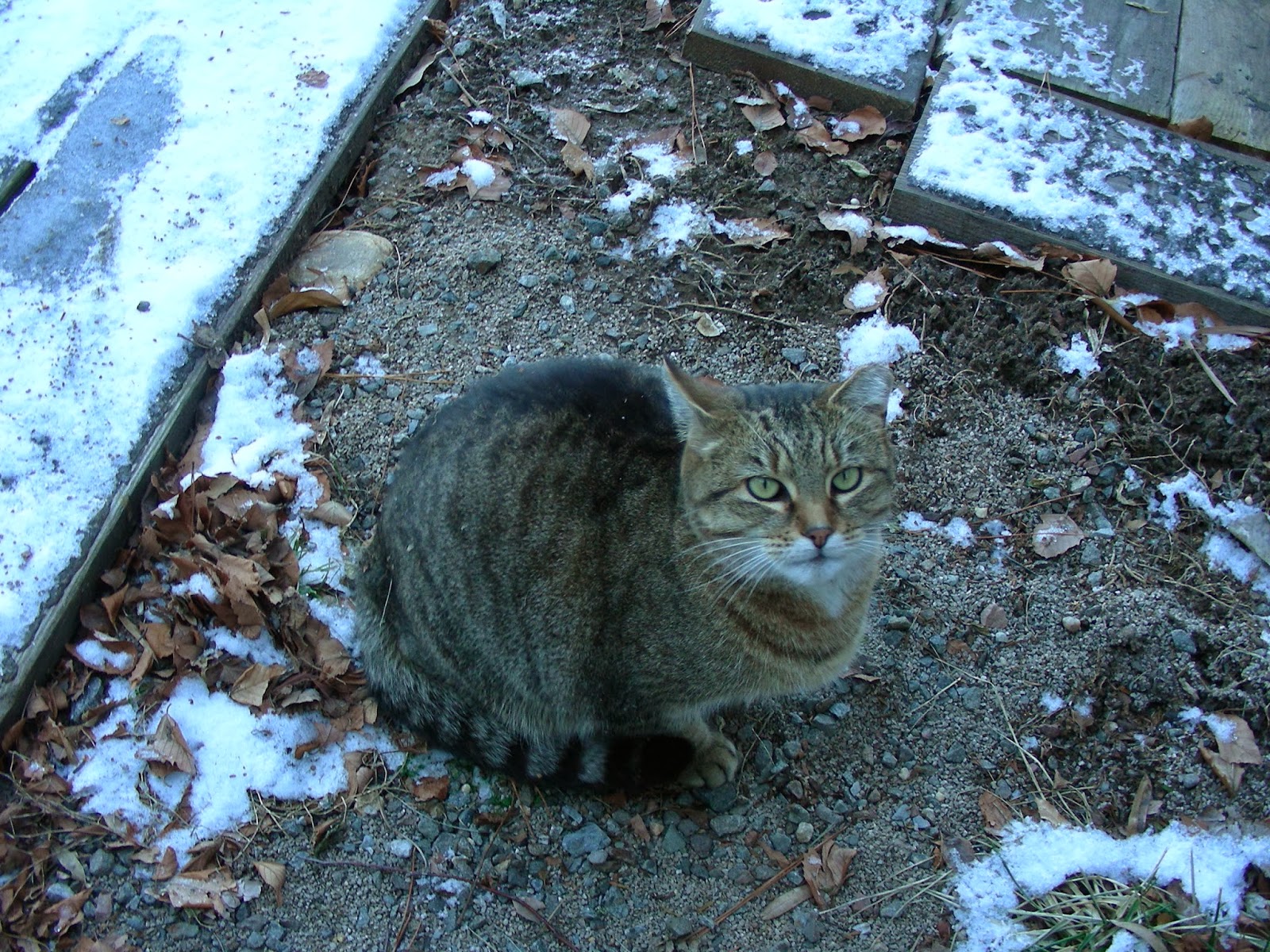 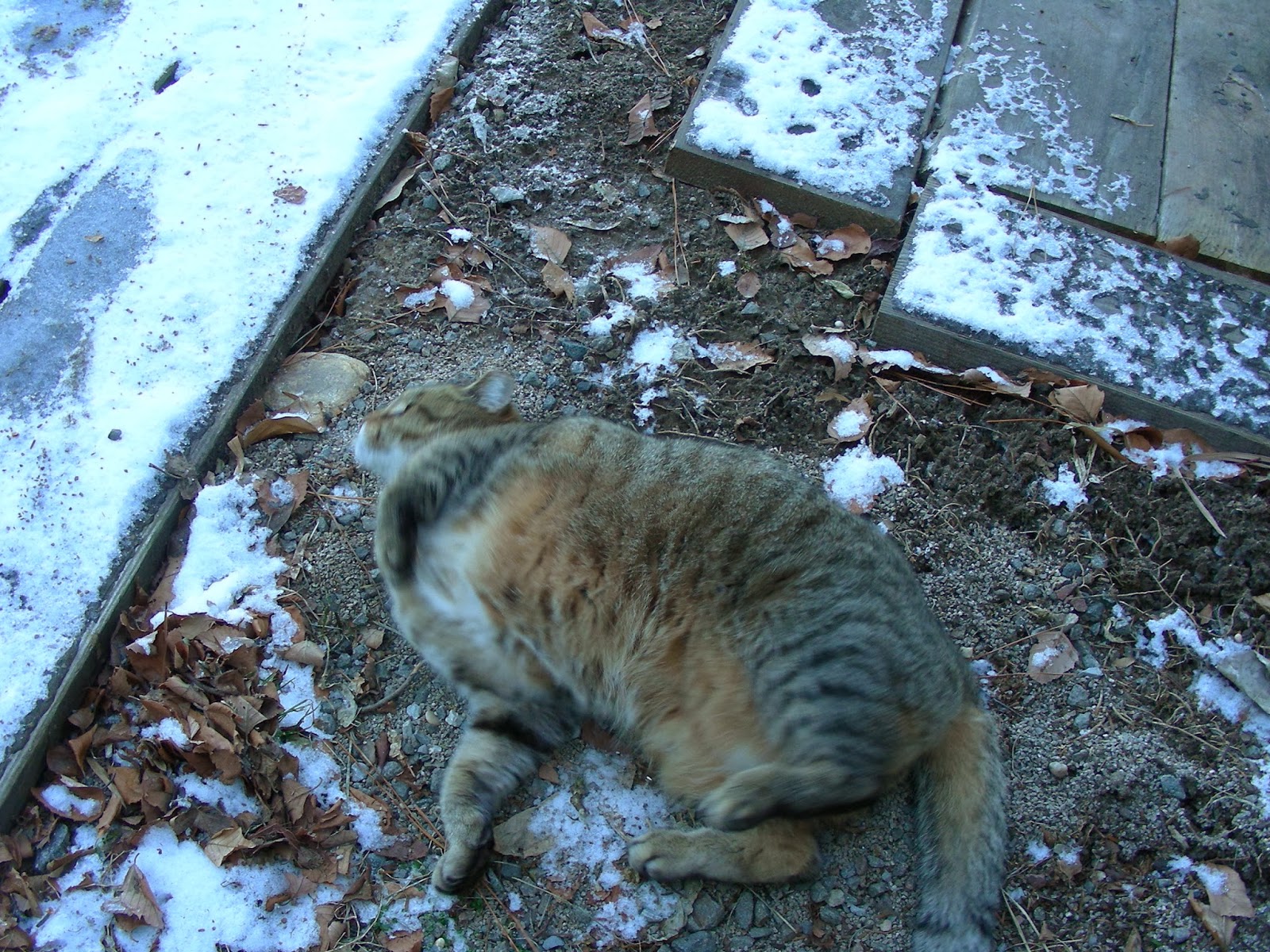 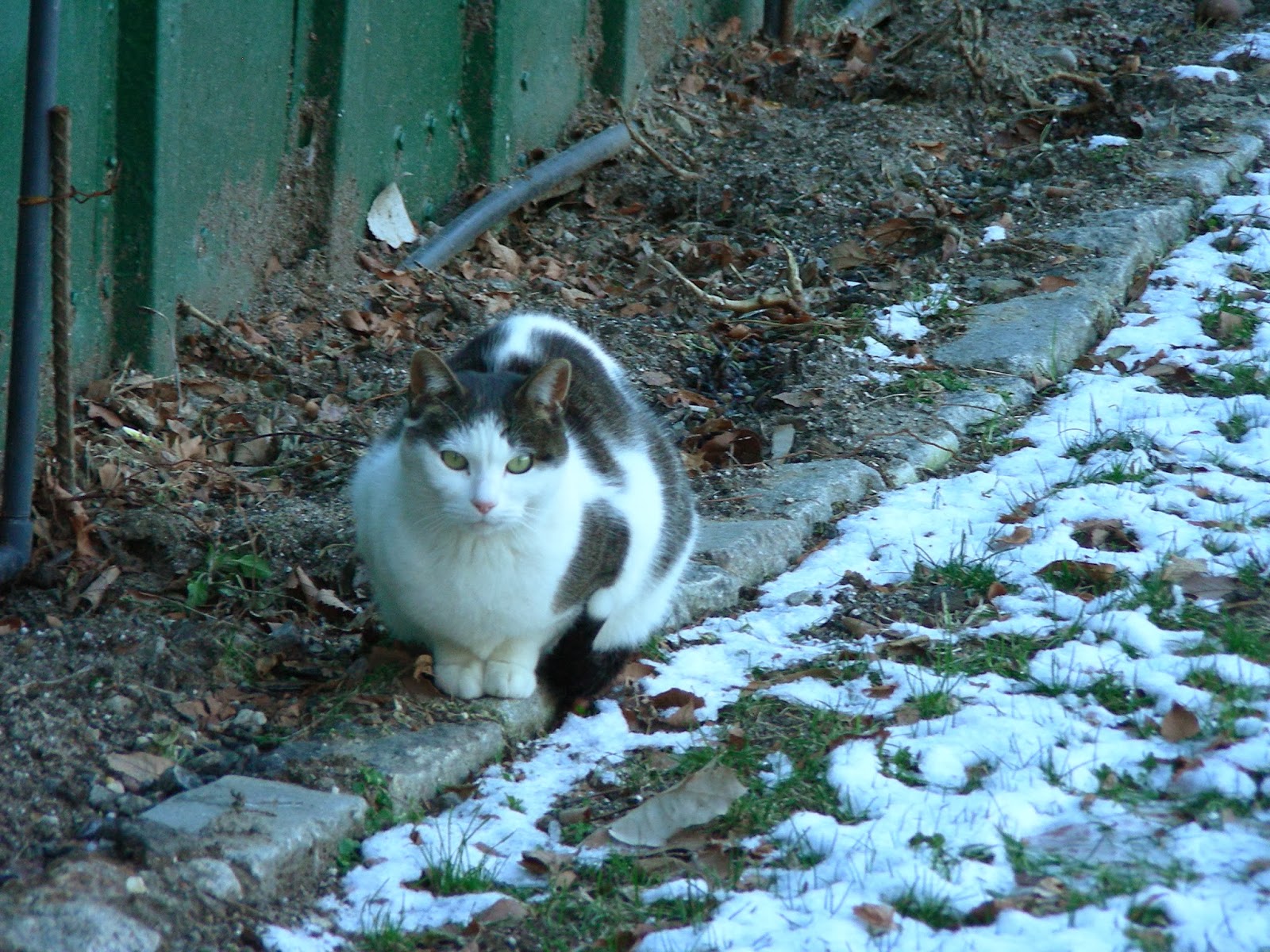 Email ThisBlogThis!Share to TwitterShare to FacebookShare to Pinterest
Posted by Eliot Markell at 11:31 PM