LeDray’s mid career survey includes an installation piece “Mens Suits” that harkens back to the good ‘ol days of musty bargain basements, perhaps populated by invisible little denizens from a Twilight Zoned dimension.
A “worms eye view” perspective of seedy looking suits neatly arranged on racks, with carefully folded tee shirts, and “back room” paraphernalia such as dollies and hampers full of hangers is spread out on the floor in 3 segments in a large darkened gallery. Getting a good look at these mini dramaturgies requires bending at the knees (watch out for your back!), but is rewarded by an entrancing glance into the compact psyche of an artist model maker extraordinaire.
The issue of scale is first and foremost in these intricately conceived sculptures. This universe of shrunken garments, never meant to fit our bodies or perceptual norms, magnifies our ungainly physical presence as giant viewers tromping about the delicacies on display.
The notion of missing persons and departed souls engages the artist’s prosaic intentions. Detritus from lost childhood innocence and a sentimental longing for a father’s long gone uniforms, informs our sense of the vacated space that these constructions inhabit, a void surrounding and insulating the artist’s sensations of loss and memory.
LeDray has made his marks in the art world playing “small-ball”, at times barely managing to avoid clichéd lapses into Peeping-Tom dollhouse fascination, and then emerging with impeccably crafted objects profoundly freighted with the dysfunctional trauma’s of abandonment and abuse.
His obsessive compulsion to grind out in exacting detail, the myriad components of midget clothing accessories right down to tiny miniature shirt buttons is astounding. Its kind of like going to a freak show without the freaks, just their accoutrements are on display.
But these leftover garments are poignant symbols of the fragile interrelationship between father/son, work/duty, and homosexual mores.
“Overcoat” epitomizes the artist’s approach to eloquently layered levels of metaphor and fabric. This freestanding edifice couples a suave formal classicism with an outsider vernacular. Displayed on a ubiquitous hanger, resembling an overstuffed tent protectively cloaking many smaller coats, it insinuates lives within, containing a collective consciousness of unknown identities.
“Jewelry Window” pays stark homage to victims of AIDS. Set in an inky dark room the hushed acoustics mute the raw emotional resonance portrayed by gracefully sweeping necklines of empty black jewelry display forms. This funereal vitrine is backlit by a diffuse pale fluorescent source that sustains a disturbingly dreamlike, otherworldly effect of dissolved souls gone to the other side.
It was with some relief that I reemerged with my physical body intact in time/space.
Its not all doom and gloom with LeDray. He has a whimsical side that manifests itself with delightful results in some of his flat pieces. Associations with quilted matrix and collage are seen as inventive takes on those traditional media. Although there is no painting or drawing in this show, the artist’s deft hand convincingly substitutes thread for the drawn line and colored cloth for chromatic fields of pigment.
Like other virtuoso talents, Ledray can get carried away by his own golden touch. There are instances when his neatness and perfectionist tendencies can get tedious and precious. The devotion to preppy men’s jackets in various states of shredded mayhem repeats itself a few too many times. The cuteness factor of fashionably adorable apparel occasionally veers treacherously close to product placement.
The artist could also be accused of self-absorbed, autobiographical indulgence but we don’t know this for sure. Even though his work is rooted in representation he keeps us guessing as to context. You have to carefully consider relationships to not only implied personal histories, but the cosmic condition as well.
One thing for sure, LeDray’s unflaggingly macro dedication to prolific micro art making is interwoven into the fabric of his deliciously nuanced and multitudinously tiny & tidy creations. 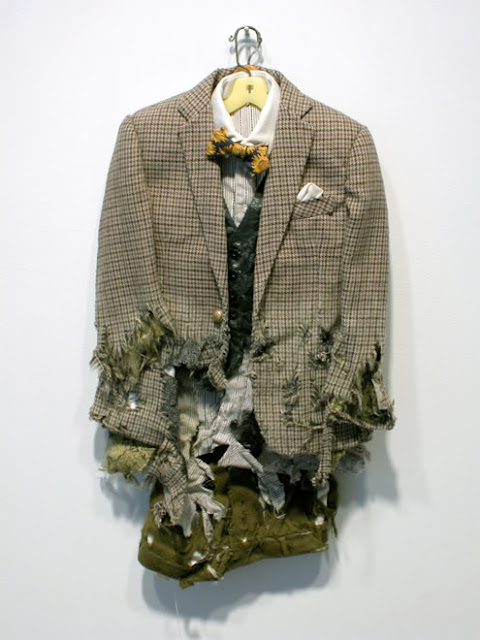 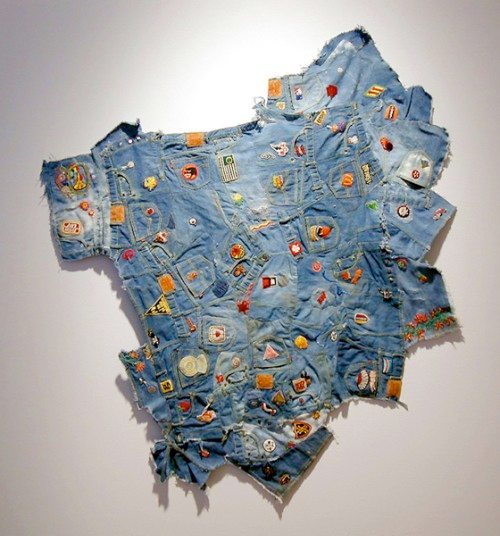 0 comments
Email ThisBlogThis!Share to TwitterShare to FacebookShare to Pinterest
Links to this post Posted by Eliot Markell at 5:07 PM

The "Chi Chi" girl from the 30's & 40's. Played "intermission" piano for the Duke uptown. Her squeaky little girl voice has an Afro version of Betty Boop written all over it.
http://www.youtube.com/watch?v=WQBQMklZ1aM 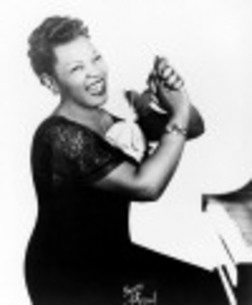 0 comments
Email ThisBlogThis!Share to TwitterShare to FacebookShare to Pinterest
Links to this post Posted by Eliot Markell at 4:59 PM

The Ruins Of Detroit

The French shaming us convincingly and compellingly.
http://www.marchandmeffre.com/detroit/index.html 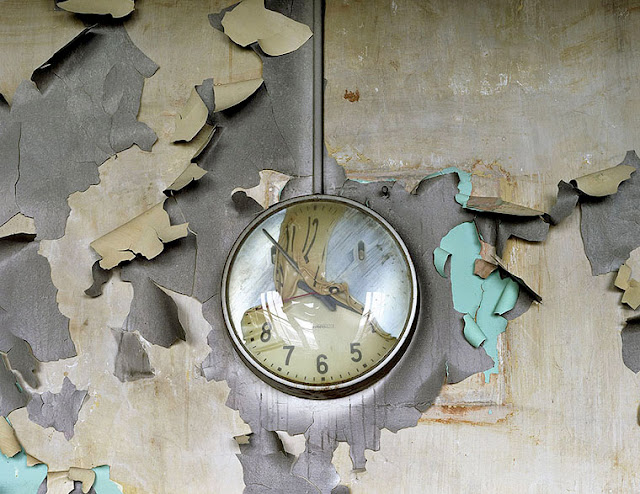 1 comments
Email ThisBlogThis!Share to TwitterShare to FacebookShare to Pinterest
Links to this post Posted by Eliot Markell at 4:53 PM 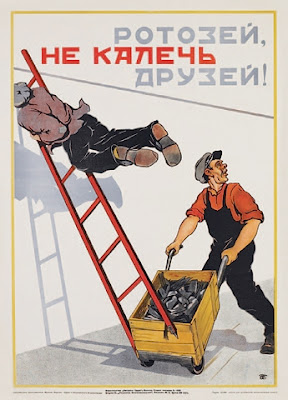 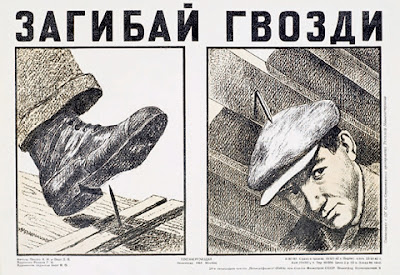 0 comments
Email ThisBlogThis!Share to TwitterShare to FacebookShare to Pinterest
Links to this post Posted by Eliot Markell at 4:47 PM

Being the SoCal surfboard maker dude he was Tomaselli’s exhilarating ride of a mid career survey does hang ten, but he doesn’t catch every wave in this polyurethaned miasma of natural and art history.
Tomaselli’s earlier work that got him a measure of renown in the late 80s featured painstakingly arranged rows of pills and herbal tablets that fan out into psycho pharmacologically inspired mandalas. His signature ”move” of coating his flat creations with a thick pour of poly created a novel visual read, imbuing his montage with an “under glass” intrigue, much as amber entombed insects invite scrutiny.
Speaking of which, as his later work branches out he does indeed begin a fruitful investigation combining art historical, entomological, and ornithological sources that includes intricately cut out images from magazines and books inserted into tightly composed diagrammatic motifs.
However the tactile theatricality of these collages become ornate to a fault. Wherein lies the dilemma inherent with visual art that relies on the literalism of assemblage materials to impress. At worst Tomaselli’s work risks lapsing into a “bar countertop” convention of overly precious eye candy you’d put your beer on and gaze dreamily down at. But then this artist proves his painters savvy when employing abstract gestures that elevate content of works like Echo, Wow, and Flutter to an exalted level of artistic rank.
It pains me to say the uneven nature of this earnest artists efforts result chiefly from his devotion to craft. I admire his dedication to art historical references, and the flora and fauna that inhabit his psyche, but he seems to lose sight of the forest for the trees. He gets so wrapped up in technical execution that some of his work begins to feel forced. To Tomaselli's credit some of the recent panels like “Big Raven” largely forgo the use of extracurricular media, and display a nuanced use of pigment to achieve a taut chromatic scheme and are quite successful.
Yet clunkers like his owls eye piece are bafflingly tiresome clichés of prettily painted pointillism. There are also lapses into Arcimboldo-like portraiture and science museum “transparent body” figuration that if they’d been done with a witty intent might amuse, but here just disappoint.
You can’t help but enjoy this artist’s overall decorative talents and inventive take on collage; I just wish the polished virtuoso were not so highly prized in today’s art market. 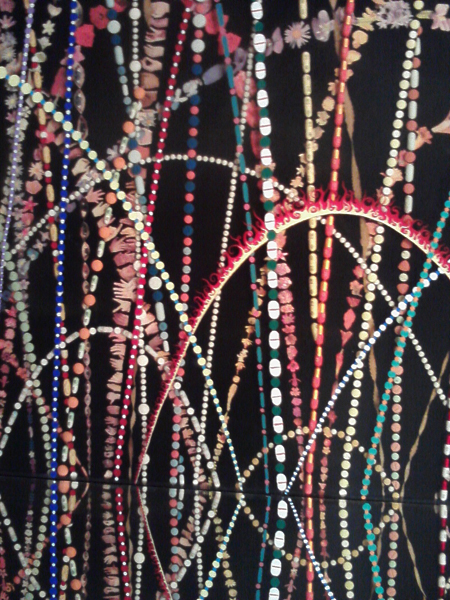 0 comments
Email ThisBlogThis!Share to TwitterShare to FacebookShare to Pinterest
Links to this post Posted by Eliot Markell at 10:43 PM

No I’m not writing this just as an excuse to post some naughty pictures, but after all it seems to have been what these pop art feminists’ preferred.
This eye opener of an exhibit is not all ironic smut, the captivating sculpture of a sea cucumber (not really, but the floppy fabric phalluses could be underwater) encrusted easy chair by Yayoi Kusama, a protégé of Louise Bourgeois grabs your attention.
Directly adjacent are the very 3-D busty busts of Marjorie Strider. The triptych of a carved wood bikini clad lass owes much to Warhol & Lichtenstein, but would have made a good backdrop for an episode of Johnny Carson.
Dorothy Iannone’s kooky canvas “I Love To Beat You” displays a primitive looking Amazonian goddess enjoying the attentions of her real-life partner known for sculpting in chocolate. Yummy.
Kay Kurt’s large-scale homage to super realism manifests as an open chocolate box. Pick your poison.
Since 2007 the Brooklyn Museum has devoted a significant portion of the 4th floor to a well designed home for “The Dinner Party” Judy Chicago’s iconic sculpture/memorial to women, goddesses, and go-go girls.
I’d never seen the original and wasn’t expecting to be particularly enthralled being the macho chauvinist that I am, but I was won over immediately. This sincere yet at times irreverently playful compendium of ancestral sisters centers around 39 ceramic 3-D plates placed in a triangle. The engaging conceit that these place settings represent a party about to take place adds urgency to the sense of presence. Although not all the platters entice, the better ones are cleverly crafted innuendoes glorifying the female genitalia in a delectable manner.
Wish I’d been invited. 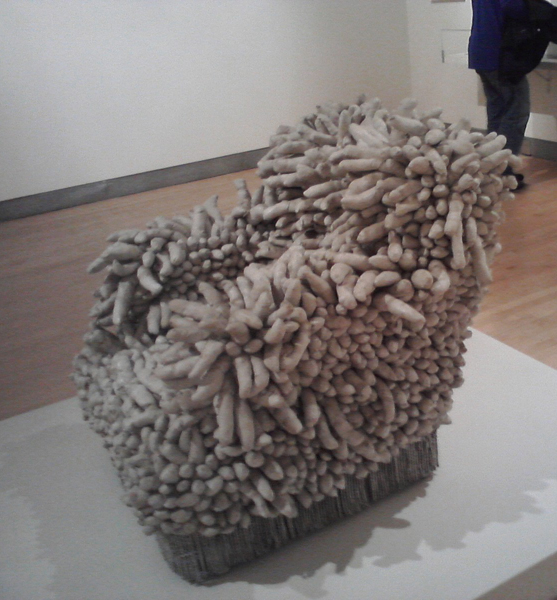 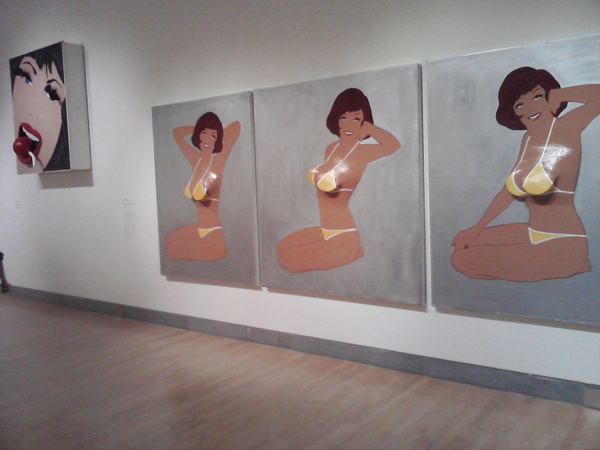 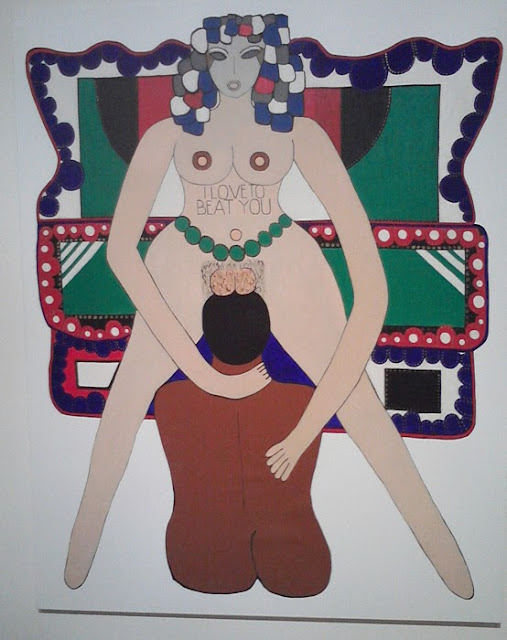 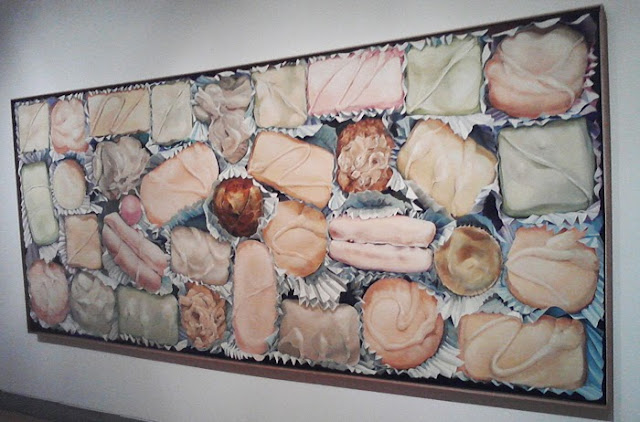 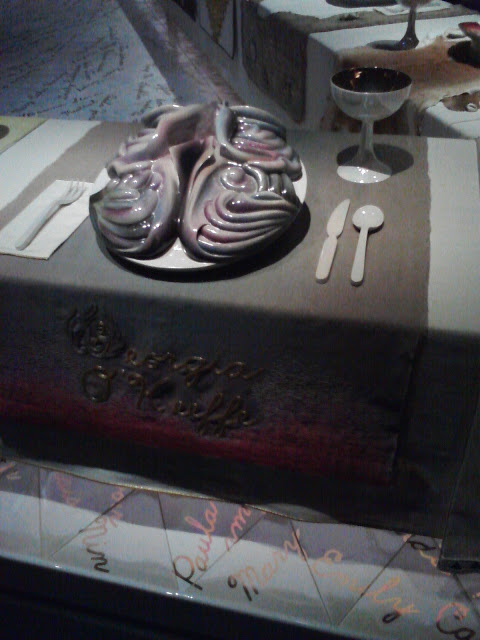 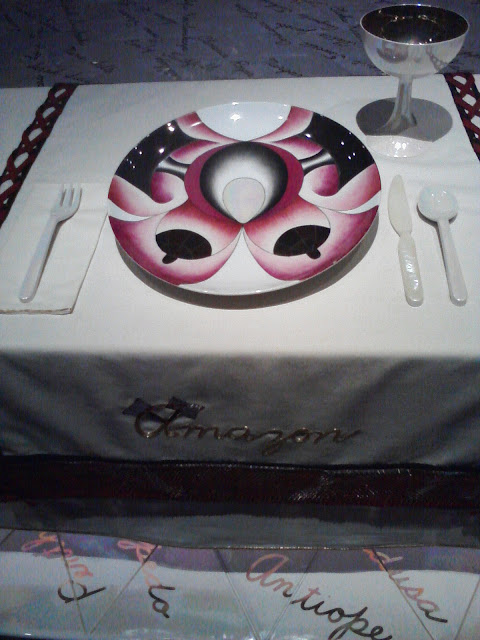 0 comments
Email ThisBlogThis!Share to TwitterShare to FacebookShare to Pinterest
Links to this post Posted by Eliot Markell at 10:23 PM

Attendance at Rich Timperio’s (Williamsburg own impresario) annual opening night come one, come all group grope of a salon style conglomeration of mostly little known artists hepped-up on even the remote possibility of being noticed, is always invigorating.
If there were any doubt concerning survival of the clan of “The Hardscrabble Group” after a couple of rough years for continuing art production without much compensation (job or art related), this exhibit should quell such worry.
Even the live chicken (a fancy looking, well quaffed bird at that) in its cage (metaphor?) mounted directly over the entryway door seemed keen on networking.
To quote from Mr Timperio’s press release:
You don’t find yourself playing in this, or any other Timperio scenario by way of a letter of recommendation. Nor does he pour through slides. His door is open, the work makes it way to him to talk or howl to him in person, as in the good old days, in this case still here and now.
Timperio is a Prospero who by arcane magic commands some Ariel to conjure up this whirlwind of mostly shattered, vacated, and fractured images; so when it hits you in the eye like a big pizza pie, if you don’t immediately know its amore, hang in. 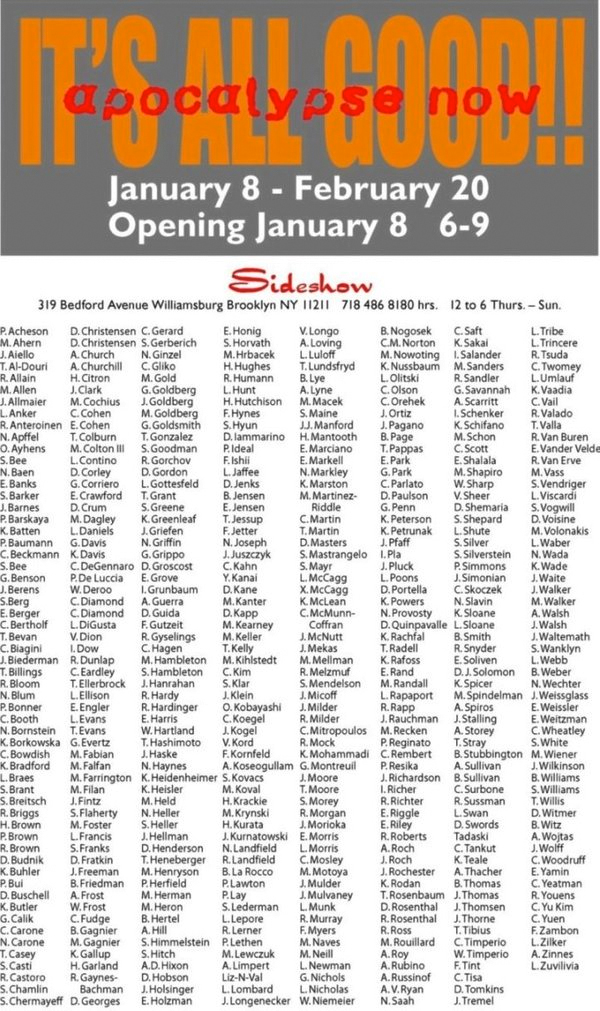 0 comments
Email ThisBlogThis!Share to TwitterShare to FacebookShare to Pinterest
Links to this post Posted by Eliot Markell at 9:47 PM

THE AWARD FOR MOST EMBARRASSING COMEBACK ATTEMPT BY A WARHORSE ROCK STAR WHO SHOULD HAVE KNOWN BETTER, GOES TO:

Paul McCartney for his recent SNL appearance while performing an excruciatingly painful off key version of Band on the Run.
Alas! Poor Paul, we thought we knew you.
http://www.youtube.com/watch?v=fUJTyVQSS3M&feature=related

0 comments
Email ThisBlogThis!Share to TwitterShare to FacebookShare to Pinterest
Links to this post Posted by Eliot Markell at 9:31 PM

JOIN THE NAVY AND SEE…WELL YOU KNOW.

(former) Captain Honors in his infinite Cinéma vérité wisdom had nothing on early 20th century queer illustrator Frank Xavier Leyendecker.
This patriotic, wish-he-coulda-been-a-homo-sailor would have made Popeye blush. Shiver me timbers! 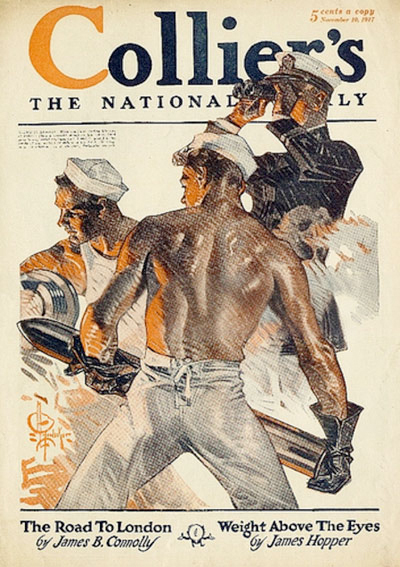 0 comments
Email ThisBlogThis!Share to TwitterShare to FacebookShare to Pinterest
Links to this post Posted by Eliot Markell at 9:24 PM
Found on Washington Ave near the Brooklyn Museum on a particularly dog shit littered section of side walk. 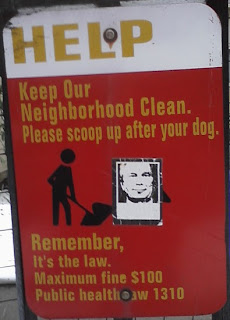 Believe me, I understand why people hate King Bloomie, but please, either clean up after your canine or just let 'em poop on your kitchen floor.