It’s all about networking.
If I hadn’t attended a recent opening at the part-time, artist studio exhibition space The Big & Small/Casual Gallery in Long Island City I still wouldn’t know who the heck Saint Gaudens was.
A few weeks earlier when I first met contemporary sculptor David Henderson at B&S/Casual we discussed transport of his biomorphic, tree hugger of a sculpture from the Pratt campus in Brooklyn to the Saint-Gaudens National Historical Site in New Hampshire, I thought why not?  A chance for a woodsy sojourn up I 91 along the Connecticut River.
Due to my glaring lack of formal art history studies I thought perhaps Saint Gaudens was some kind of French Canadian explorer on his way to Lake Champlain.
I hadn’t yet grasped the significant irony of delivering a sleek piece of recent Brooklyn sculpture to the magnificent palatial estate of this preeminently classical, Victorian era art tycoon.
In fact, it wasn’t until Jeanne and me were halfway to New Hampshire in my truck that she mentioned something about were we going to that famous 19th century American landscape sculptor’s old digs. I do take some solace from acknowledging that the Gilded Age was just never my thing.
After getting some good advice from Annette Compton, the curator at Saint Gaudens about dodging the old low overhead bridges crossing the river from Vermont, we arrived at the secluded locale.
Aspet, the main house near the visitor’s center, overlooks acres of sprawling field and lawn. (once a 9-hole golf course, no wonder I’d wished I’d had my clubs!)
The sculpture was going to be installed on the other side of the property, so I got to drive around on the grass. I love driving on grass; it makes me feel agrarian, like I’m driving a tractor.  Someone should figure a way to make a grass interstate, quieter, a lot less glare, much easier on the eyes.
The crew of Park Service rangers quickly helped off-load the two disassembled sections of the relatively lightweight ”Skylark”. While David and his National Park Service crew got started installing, Jeanne and I got a quick guided tour from Annette.
The sweeping view west out past the Connecticut River towards Ascutney Mountain is spectacularly serene. Complimented by a foreground dotted with gardens, hedges, and sculpture, Saint Gaudens evokes the splendor of art and nature, each patting the other on the back.
At the end of a long hedgerow sits the “Little Studio” (which I guess it might seem, situated in that expanse of sun drenched greenery), that was St Gaudens’ primary studio. There is a spacious, inviting porch with Doric columns, and a pleasingly pink stucco façade with casts from the Parthenon. Theres a certain symmetry to parts of the Hearst Castle, which also utilize architectural elements (“acquired” shall we say?) from indigenous locations.
There is a kind of romantic association with this robber baron decorating scheme. Perhaps the allure of far away places, and saintly idols that Saint Gaudens embraced was fostered by his “Cornish Colony” crowd that included Maxfield Parrish’s saccharine saturated sensibility.
However overbearing his oeuvre may have been, Saint Gaudens was a dedicated craftsman. His meticulous and finely tuned figures gain a stately and dignified demeanor that imbue a narrative credibility to their idealized stature.
His gasp of profound historical moments is epitomized by the Shaw Memorial on view to great effect in its own hedgerow niche. This monument to the 54th Massachusetts regiment made up of former slaves is a compelling piece of public art that captures the drama and momentum of the march to war.
The gold coinage commissions were also intriguing. His strong allegorical abilities are put to good use in these tiny tondos. Saint Gaudens’ allegories were earnest, non-ironic tributes to the virtuous moral rectitude of the day. Combining detailed etching with nuanced contour, these tour-de-force miniatures employ dramatic visual metaphor helpful for conveying a “gold standard” to currency.
Since the capitalist ethos demanded devotion to greed, what better way to profit as an artist than to design valuable money? Talk about conceptual art!
Spying my white beast of burden shimmering by the distant tree line, we headed back. I wondered what previous generations of art conveyers had used to bring precious objects de art to this pastoral pasture. Donkey carts no doubt.
As David hoisted Skylark into its final position, we bid adieu to Aspet and hit the road. In a little while we were back by the non-grass interstate, with it’s attendant strip mall rude awakening.
http://www.bigandsmallcasual.net/
http://www.nps.gov/saga/index.htm
http://davidhenderson.org/ 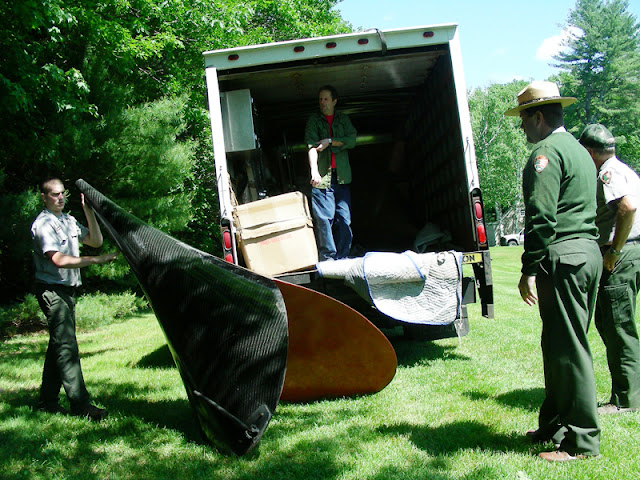 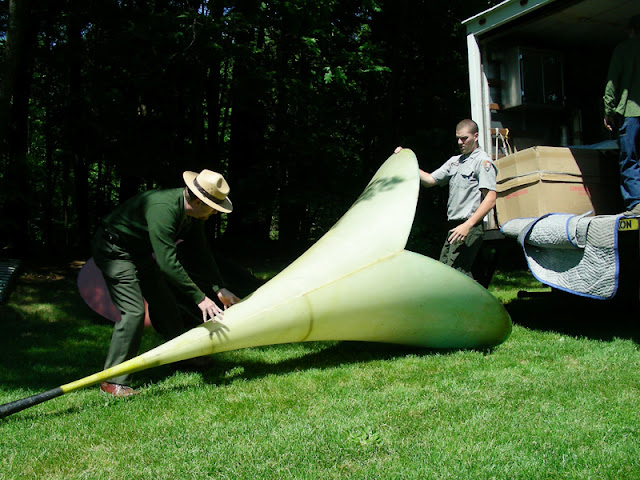 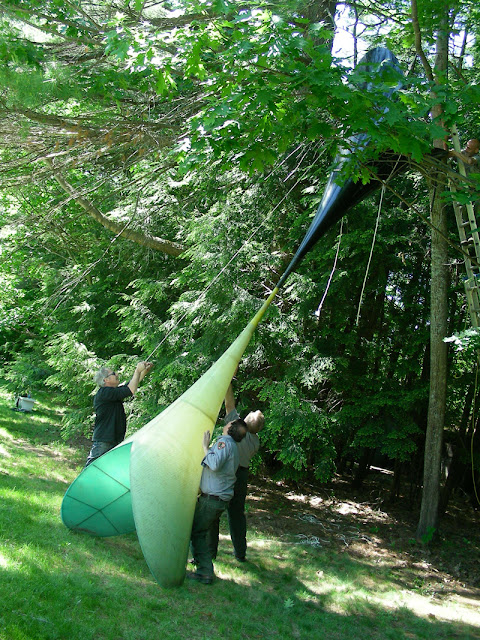 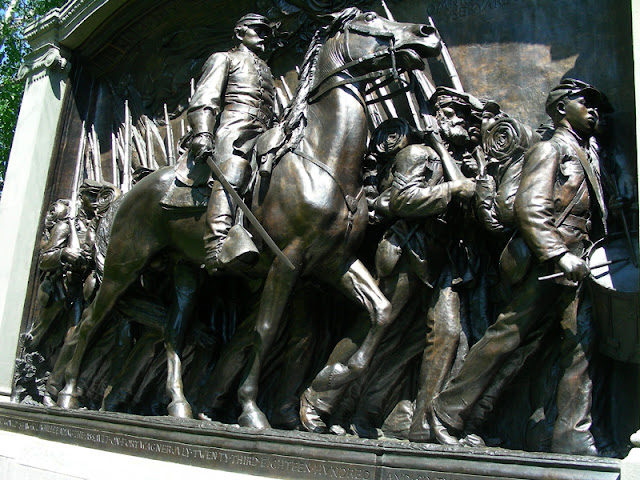 0 comments
Email ThisBlogThis!Share to TwitterShare to FacebookShare to Pinterest
Links to this post Posted by Eliot Markell at 6:17 PM


Its amazing I’ve lasted as long as I have at Brooklyn Fireproof. This once out-of-the-way building of relatively unimproved artist studio spaces now features a rock’n roll bar downstairs (albeit cash only)
The building next door houses the studios of big shot artists such as Amy Sillman and Fred Tomaselli (oh god, now I’ve become a name dropper. You’ll have to shoot me.)
I’ve always had to vacate the premises as soon as these kinds of hip ventures appeared. I did have to downsize last year, but perhaps as the elder statesman (Jeanne and I always feel like someone’s parents when sitting at the bar) in the building I’ve gained some equity.
So even though my cynical side thought why bother, no one ever goes to open studio days, we decided to give it a shot again this year, after missing last year due to apathy.
We could only open for Sunday this year (Sat was the busier day according to some other artists in the building), but nonetheless we got a pretty good crowd (including a 6’4” cross dresser with purple tights and pancake make-up, who was quite pleased that she fooled me briefly).
We didn’t get offered a show at Gagosian, but we did have a good time putting up some new work, sipping some vino, and hanging with some like-minded hipster artist types.
We really all should grow up and get jobs! (nah) 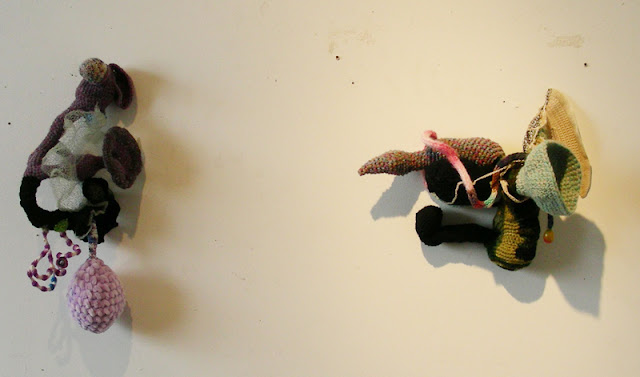 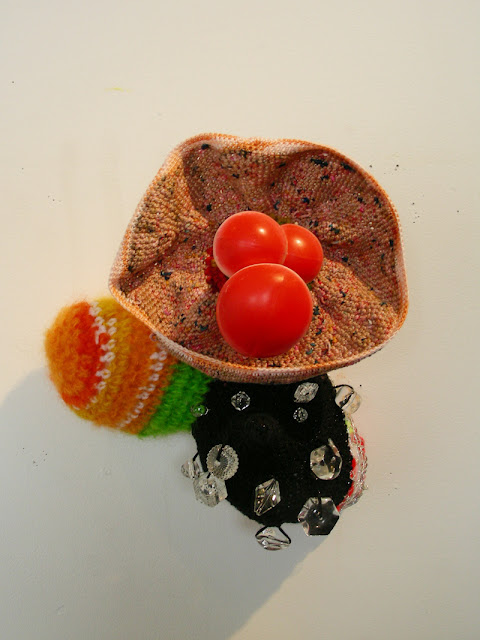 Crochet and new oil paintings on paper by Jeanne. 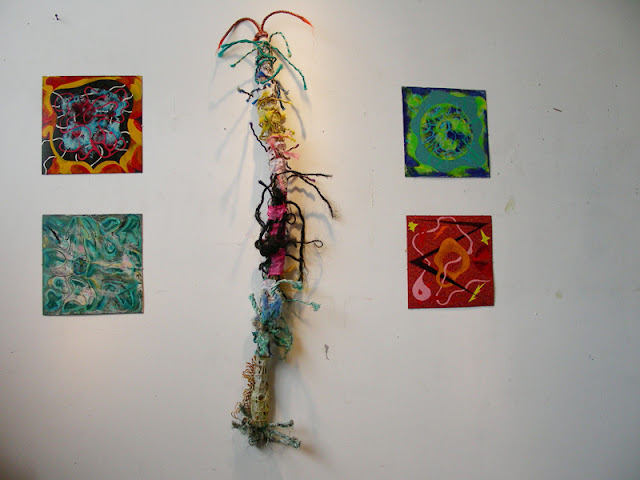 New Beach Rope sculpture by me, with oil stencils on marmoleum. 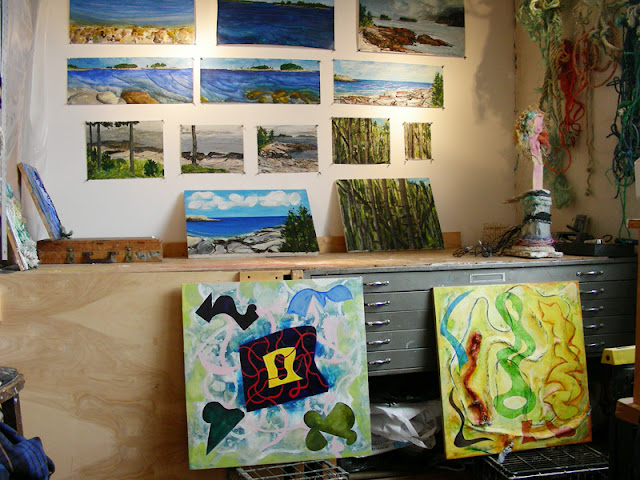 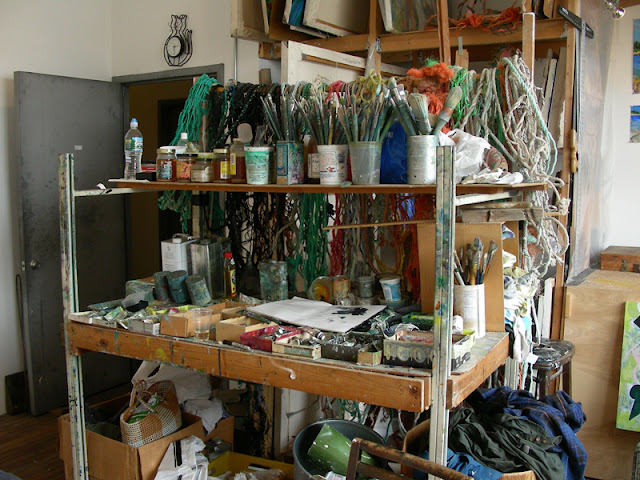 My painting table.
Taken of some other open studios in the building: 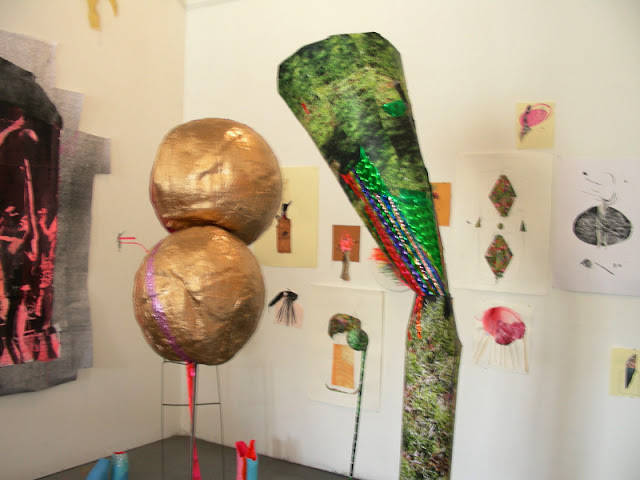 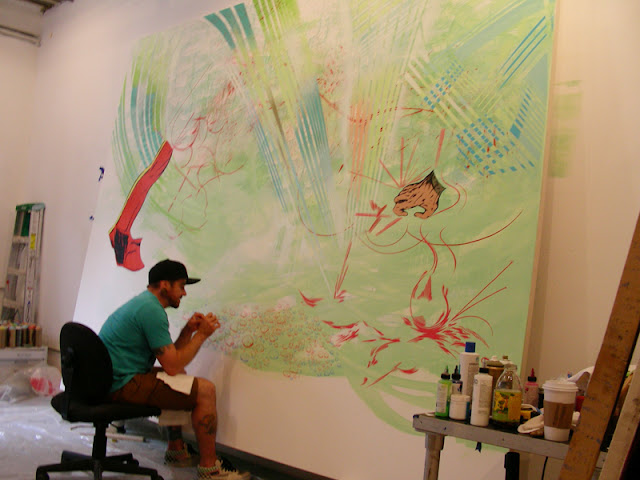 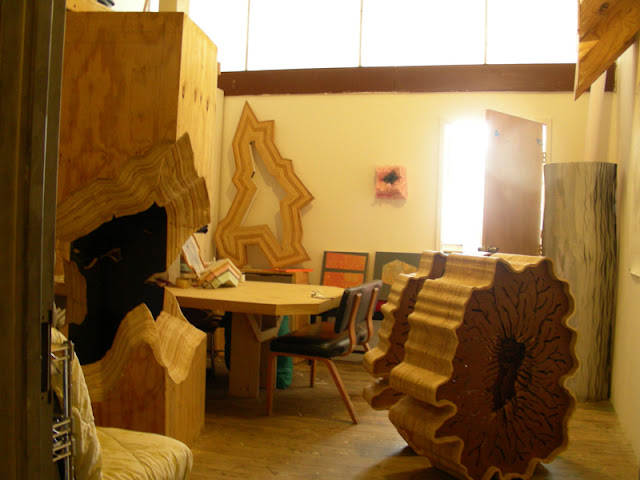 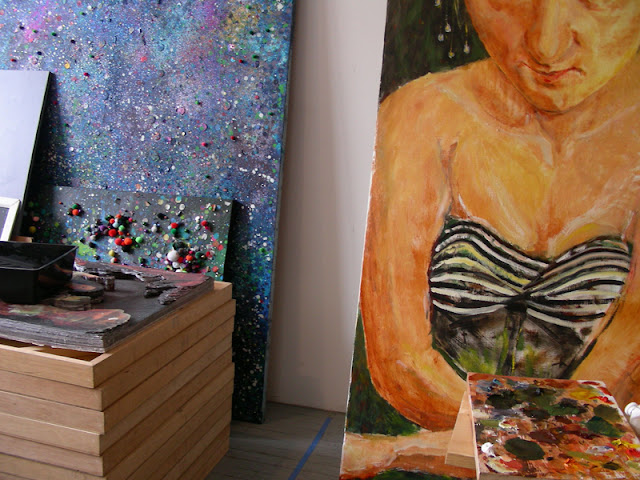 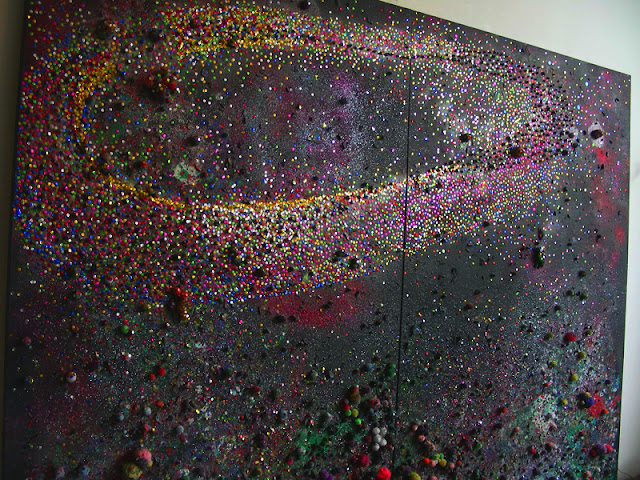 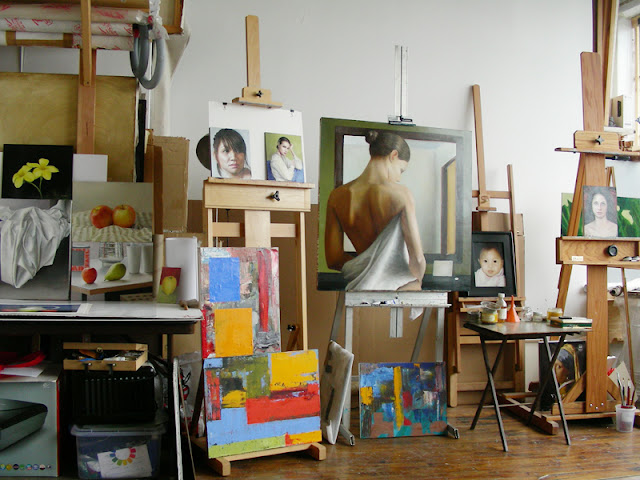 0 comments
Email ThisBlogThis!Share to TwitterShare to FacebookShare to Pinterest
Links to this post Posted by Eliot Markell at 5:55 PM


A long way from the mean streets of Bushwick (or Soutine’s Montparnasse for that matter) the swank environs of Madison Ave and the Carlisle Hotel host the comparison shopping spree of Soutine/Bacon.

But wait a minute! Unlike the neighboring big buck boutiques, according to HNG no art’s for sale here. If you believe that I know about a lower East River bridge that’s not for sale either.
There has been some discussion of how the upper echelons of NY galleries are moving in on cash strapped museums to mount their own mini blockbusters. But these high end gallery exhibitions are really more akin to auction house action than museum retrospectives. Collectors and dealers are testing the waters in uncertain times. Unwilling to take risks with unsold lots at auction, they’ve camouflaged big ticket gallery extravaganzas with out price tags as a way to gauge market viability.
This harmless bit of backroom scheming bothers me not a wit. In fact it represents a chance to see work from private collections that might otherwise rarely see the light of day. There are some well known museum pieces in this show, obviously on loan and truly NFS. However, I would imagine that some of those same museum trustees that had a hand with these loans also might have serious interests with inventory still in private collections.
Indeed there are some rarely exhibited beauties here which I had never seen, including Soutine's Portrait of the Sculptor Oscar Mietschaninoff (1923-24) and Bacon's Untitled (Study for Dog), ca. 1960.
The unassuming little Study for Dog turned out to be my favorite Bacon in the show. This intimately blurred gesture of what I’d guess was a beloved pet seems untouched by the torment and angst that holds sway with most of Bacon’s more prodigious work.
Although Soutine’s still lives’ and portraiture are what distinguish his painterly exploits in a more formal context, I’m always floored by his landscapes. The impenetrably entangled vegetation choking off any chance of escape from the houses of Cezanne or Van Gogh in “Group Of Trees” confirms this artist as an undeniable powerhouse of paint.
You wonder if the so-called distortions in Soutine’s compositions are really just a keen extension of the way he felt space and light unfolding in his psyche. Was this representational art to him?
On the other hand, Bacon’s dastardly deeds sometimes feel stiff, even contrived in comparison.
Bacon’s agony never seems to be followed by Soutine’s sense of release. The caged-in notion of Bacon’s being trapped in his canvases parallels Soutine’s inevitably chaotic contours. However while the hand of an unseen specter guides Soutine’s claustrophobic density, Bacon’s sheer force of will overcomes any extraterrestrial effects.
Bacon was a determinedly angry painter, who demanded respect, while Soutine owned nothing; he was simply the tip of the brush.
http://hellynahmadgallery.com/ 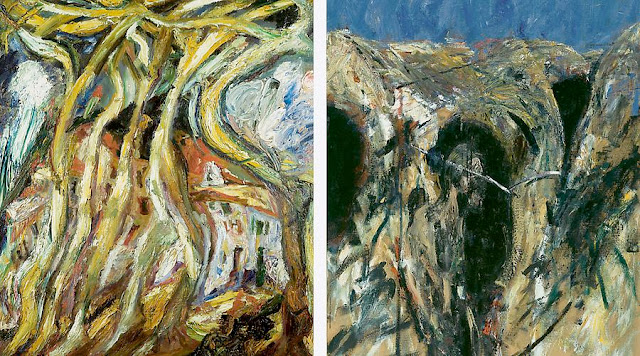 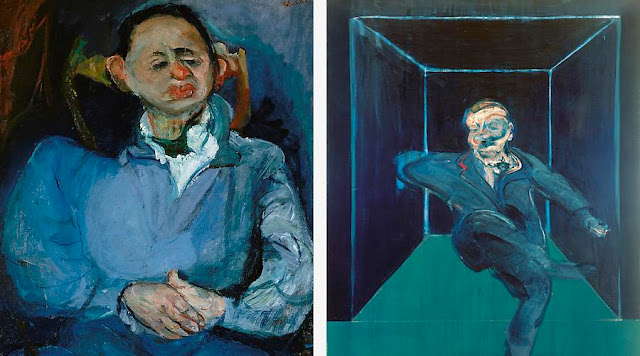 0 comments
Email ThisBlogThis!Share to TwitterShare to FacebookShare to Pinterest
Links to this post Posted by Eliot Markell at 5:38 PM

The Van Gogh Project, a blog by Paul Studtmann


By far the most amusingly sly piece of art blogging I’ve yet to stumble across.
Concocted by a crackpot/visionary philosophy professor in Indianapolis (I think), the episodic vignettes revolve around a piece of art called “Falling Down Man” shipped to said professor that was damaged by USPS.
But the philosophical constructs thicken when the artist decides that this mishandling has markedly improved the painting.
Our intrepid blogger has also hatched some kind inscrutable scheme to acquire a Van Gogh based on a wacky comes around/goes around, trade up in the universe premise.
You have to have been there.
Excerpt:
Wednesday, June 8, 2011
Waiting For Mordot
It is funny how greedy I can be. I haven’t yet received an offer for Falling Down Man that I want to pursue and so have been wondering why the Universe has abandoned me.

But that’s crazy! It’s only been a few weeks since the Universe gave me a great gift.

The USPS chucked a spear into Charlie’s painting thereby doubling its value and allowing me trade up along the OJ scale. The Universe couldn’t have given me a clearer sign that getting a Van Gogh is a genuine possibility.
http://thevangoghproject.blogspot.com/

0 comments
Email ThisBlogThis!Share to TwitterShare to FacebookShare to Pinterest
Links to this post Posted by Eliot Markell at 5:29 PM


Lets face it, its not just us art movers that hate bike lanes, it’s also the riders themselves. Although mostly for the wrong reasons, but I’m posting this anyway. No one can accuse me of being partisan

This deadpan comedy is astoundingly kinetic, prepare to wince has the all-to-real stunts must have been bruising.
I particularly laughed when he ends up in the back of a truck! Could they be art movers?
http://www.youtube.com/watch?feature=player_embedded&v=bzE-IMaegzQ