EM: Jong what can you tell me about your Socrates Sculpture Park installation “To You, Little Bigger Than A  Sweet Summer Pink Peach” and how it was affected by hurricane Hanna in 2008?

Started the installation in middle of July, I had prepared the material way before July. Weather was dry and very hot during the August, the major installation period.
My face so tanned, completely dark, after working over the summer. My Mia, my jackrusell terrier, struggling over the summer with the pregnancy. Sometimes I saw her belly was touching the ground because of her short legs. On 31st she gave a birth, one of the three puppies. She was struggling for another one, but Mia was too small for the one. The puppy died. She screamed. I cried. I asked forgiveness to her for my ignorance.
Through all the drama, on the 3rd of September, I was thrilled to complete the piece. Next day there will be an opening, glorious indeed. From around 3 o’clock I started to feel some raindrops. I was rushing the final touch. There had been a Weather forecasting kept repeating that the major hurricane, Hannah will be NY state area by tonight. Around 5 PM rain was pouring. I did not know if the heavy rain was making the ground muddy, soft. Maybe the heaviest rain amount ever since I move to NY. Even the rain was more after 7 PM. I could not keep working. I stopped. Cleaned the site. Came home around 8 pm.
I throw all the wet stuff away into the bathroom.
Took a shower. My body was dried, felt so good.  After a long time finally I was in peace. I slept, dreaming to see in tomorrow opening, my glorious offspring, “To You, A Little Bigger Than A Sweet Summer Pink Peach”.
I slept 9:30 am. Wake up noticed that the director of the park left an urgent message. I rush to the park. Weather was incredibly calm and clear blue sky. Under the blue sky, I saw 2/3rd of my offspring peacefully laid down. It was still beautiful and sad. Many people in the opening even did not know what was happening. They thought that was the original state or intention of the artist.
I erected the piece after three more weeks of working. And it had stayed for the entire 7 months, until March of 2009. I was surprised that a whole processing for the installation was very the same as my life journey. 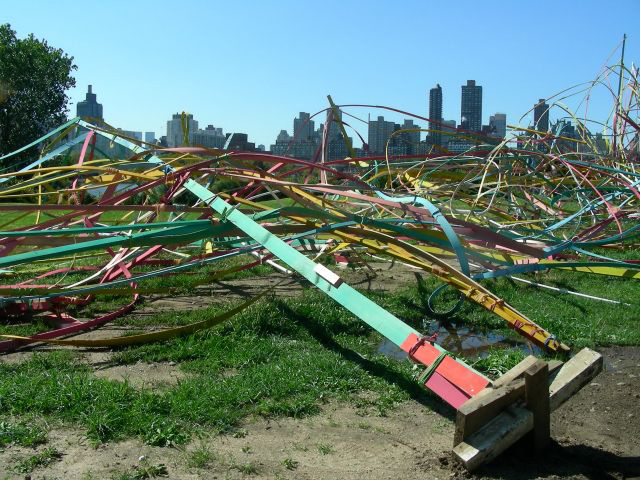 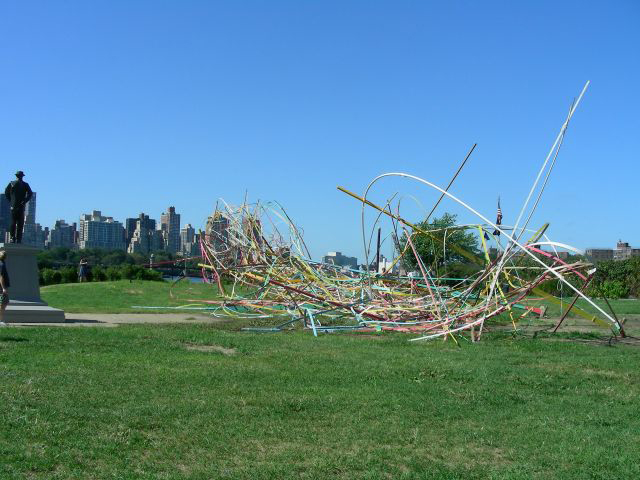 EM: Would you say your Korean heritage affects how your art has evolved?

The life in the nature, the limited openness to various cultures obviously makes grow something inside of me.
I grew up in the very rural southern Korean village. I got naked until I was 7 years old. Major my toys were sand, stone, wood, bamboo and soil. I always made something by cutting down some pine trees, bamboo and other natural material. Other wise life would have been too boring.
No cars no electricity until I was 2nd year in the elementary school. When all the adult people went out to the farm around late spring, I used hear mourning dove breaking absolute silence and I hated it.
When Winter season, we fire the ‘Ondol’ Korean way of heating floors/rooms. The floor made with thin-wide flat rocks and smoothed out with mud. The floor located few feet above the firing place underneath.
An hour firing heats the floor until early in the morning. I rested and slept on warm rock floor and went out running around on the snow, spinning tops, or fly kite then came back to the room to warm my body up.

When I was 8, I nagged my father to send me to Seoul. I knew what was the city like because I traveled there by myself since I was 5th grade. I was very excited to experience so many new people, tall buildings and new culture, like film theater, restaurants. I moved to Seoul when I was 8th grade. Just two months before I graduated the high school I started work in Daewoo as an accountant and regular office work. The second military dictator, Jun Doo Whan, occupied president office.  I served for three years of mandatory military service in the DMZ.
I came back to the office right after complete the military service. The military experience gave me a lot of positive energy during the time but now I think there had been so much unreasonable abuse too. I often, these days keep thinking about the relationship between an individual and the nation.
After jumping around here and there for learning some basic design or fashion design I decided my real job should be to become an artist because I thought this is the only way to live freedom of life.  I struggled for few years and finally I came to NY.

EM: What was it like immigrating to the US as an unknown art student without any support network?

I was not exposed to foreign culture when I came here. Upon my arriving I was like dry sponge absorbing new culture. Everything was excited to see, feel and experience. Some art, music is still making me feel excited now. I studied English for a year. It was a big challenging. I still could not pass the English proficiency test until the beginning year of senior period in SVA. I started fine arts major in SVA in 1997. For studying fine arts, SVA was the greatest place. Many teachers were actively showing their works in the galleries. Discussions in the class, frequently toured major galleries almost every month were major impact to my soul as an artist. I thought I almost saw my dream is coming to be true. I almost touched it. Even after full 12 hours of labor in the supermarket during the night hours, I could be very excited and enjoyed the class. I acquainted friends. I took an advantage to see a lot of films when I lived near the Kim’s Video around 1999.
After the physical labor it was not easy to read books. Instead I decided to see some great films. Those of great film directors, Andrei Tarkovsky, Ingmar Bergman, Pier Paolo Pasolini, Abbas Kiarostam internationally renowned, their intensity of creativeness, changed my perspective as an artist meanwhile I feel a shame that I did not know those hard working artists before coming to NY.
After a serious pondering about what to do as an artist, I felt wood really connects to my body.
I started to make a simple figure with wood, and that is my base of current works.

EM: I really enjoyed both your Governors Island installation for LMCC and your Taller Boricua piece. Please give me some idea of your process and purpose with these 2 works.

In the LMCC new gallery opening exhibition in Governors Island, I was focusing on two different matters, one was to express my own idea, which bring the structural essence of modern bridges, building and its delicate balance. This was a metaphor to our complex political, social relationships. It is a kind of so sublime meanwhile so dangerous and very temporary ephemeral life aspects in particular. The key word was tension. Each pieces have the very right amount of tension to stay as it stay in the right position. If it was too week strip then added to another or twist it to have the right amount of tension to be exist and hold another around the piece.
Another my concern was that how I participate with the audiences who are mostly not the professional artist to the Island. It was always a matter to me spending time whether I pursue my own pure idea or consider the circumstance, another way of telling, what is an artist’s contribution to the society or how I mingle myself with the viewers.
As other my previous pieces did the pieces allowed people walk around or into the piece. It provided all different images as you look from the different side.
It was mostly the same intention when I did the installation in Taller Boricua gallery except I tried a lot more trying to be improvising it many moments.

EM: I know the AIM program gave your career a big boost, how would you compare that to receiving your recent Pollack/Krasner award?

Through the AIM program I have some great chances to expose myself to the public. I had a pretty big project in Randalls’ Island in the summer 2011. As I wish I could install my piece in between Hell Gate Bridge and Tri borough bridge.
I had a great amount of support from the city park organization. Right before I started this piece there was AIM biennial exhibition. I had a chance to install in the lobby of the Bronx Art Museum.
After all these busy schedule, the difficult life was not resolved as an artist. But eventually at the end of the year, just before the Christmas, I got a phone call from the Pollack Krasner about the approving of the grant.

EM: Your new furniture pieces seem to bridge references to fine art and high-level craft. Are you familiar with the early 20th century arts & crafts movement has it affected the way you think about your art objects? Do you see your furniture pieces connecting to your art or as something in between or even separate?

It was not the idea of early 20th century art & crafts movement.
After many times of my strong egoistic trial in those installation pieces, I was becoming a little bit skeptical about what I have been creating, a lot of times, specially in certain local place where most neighbors not so familiar with current art world. Furniture was my attempt to bring the tight relationship between artist and viewers. My furniture piece always will be separated with my artworks. However when I make some furniture pieces I try very hard to bring authenticity and unique creativity.

EM: What would/does your ideal career as an artist looks like?

I can talk about my role model to answer to this question. My role models are Neil Young and Martin Puryear.
Neil Young is the one has great energy for creating music and playing it. Meanwhile he has brought constantly to let the people know about cruel human power.
Martin Puryear is the one persistently trying himself in the position to separate from the absurd commercial art world. As a result he has very clear own aesthetic language in his career. Currently I am having unbelievable difficulty as an artist because of lacking of financial support either from out side or by my own sales activity. I aware how much difficult matter it would be as an artist to keep away from the commercial influence and keep his own purity. These two people are perfect example for the good and it is true power to make our society exist for the right future.

0 comments
Email ThisBlogThis!Share to TwitterShare to FacebookShare to Pinterest
Links to this post Posted by Eliot Markell at 6:49 PM

Salon Style; to be or not to be? 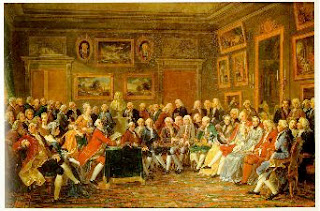