Cheim & Read
I seem to be spending a lot of time at Cheim & Read these days. I guess the upper echelon always gets the pick of the crop, and this late work by Louise Bourgeois certainly deserves harvesting, as it is a feast for the eyes.
Culled from an even more magnificent looking exhibit in Venice at the Emilio and Annabianca Vedova Foundation, these intricately stitched abstracts flutter like esoteric burgees coded in a profoundly mysterious semaphore.
I’ve always found Bourgeois’ seemingly feminist intent sabotaged by her exquisitely fine tuned sense of being. Her art extends past the merely socio-political into a temporal flux that brings old and new sensations of personal history into well-crafted alignment.
The mundane nature of her media here, brightly colored fabric that may have come from some scrapheap, is reanimated with a deft flourish of precision sewing. My favorite group resembles unfurled beach umbrellas drifting over an expanse of oceanic chroma. These poignantly visual recollections evoke a summer day at some salubrious, Riviera-esque resort.
The child-like playfulness, and delicacy of touch found in this 90+ year old’s vision, connects to her use of memory as a tangible art medium. This innate ability to corral psychic flavors from her past, and make art based on dream-like narratives, engages us just beyond the cognitive.
The biographical imperative is compelling; a large vitrine encapsulates a feminine form, breasts that read as berets (or vice versa) devolve into a mattress stuffed with a lifetime of a woman’s secrets. On an enjoining wall a revealing peek into a metaphorical lingerie drawer; a small box contains a nylon rumpled up into an old ladies’ blossom. I wonder if she ever met Joseph Cornell?
What I admire most about Bourgeois is how she manages to remain undefinable, while becoming all things to all artists. She wasn’t just a painter, or a sculptor, but a symbol for creative ingenuity that always serves to inspire artistic integrity.
Bourgeois has to be one of the cultural giants of the 20th century. Her recent retrospective at the Guggenheim served to cement her legacy. More intimate glimpses into her oeuvre, such as at this exhibition, just serve to provide further appreciation of this artist’s multitudinous gifts.
http://www.cheimread.com/exhibitions/2011-05-12_louise-bourgeois-the-fabric-works/
http://www.fondazionevedova.org/en/louise-bourgeois-fabric-works 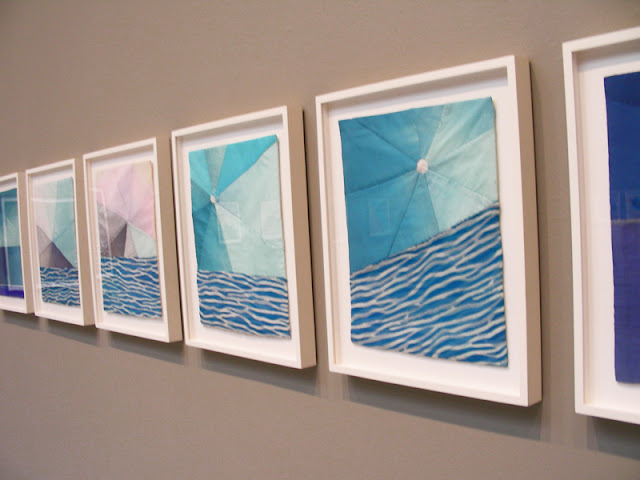 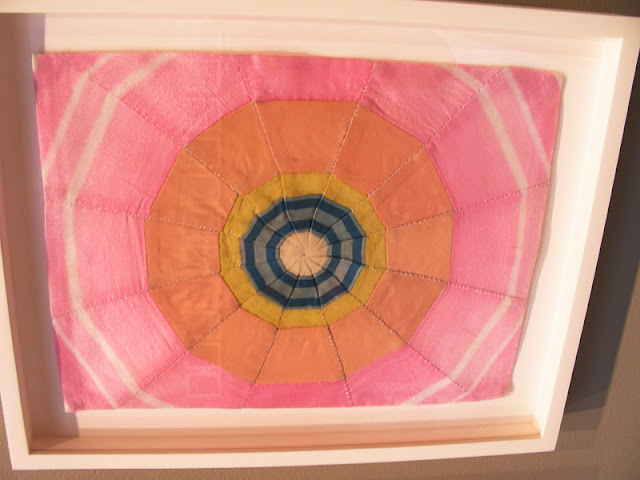 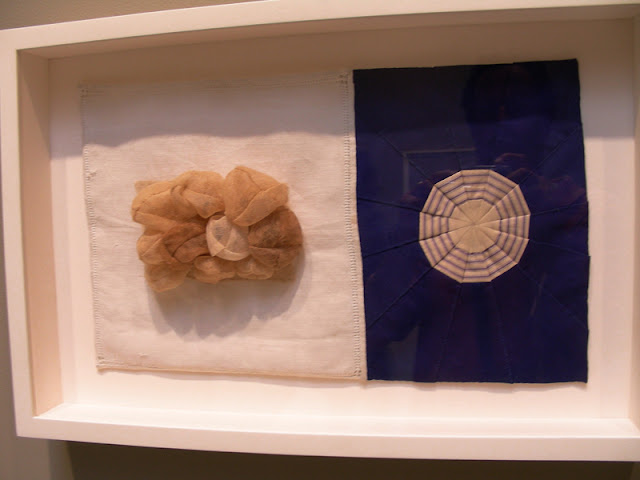 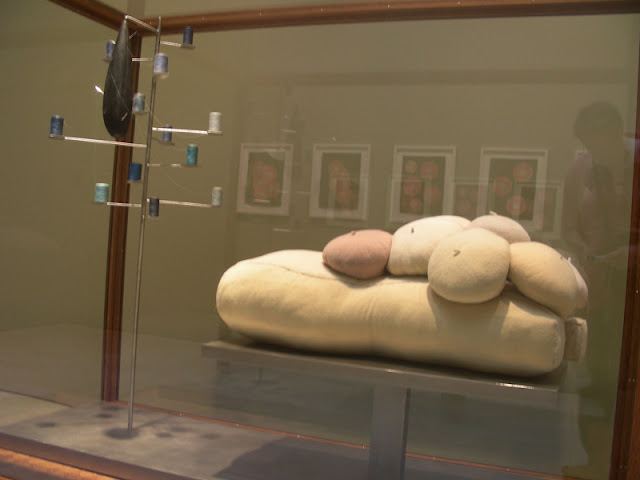 0 comments
Email ThisBlogThis!Share to TwitterShare to FacebookShare to Pinterest
Links to this post Posted by Eliot Markell at 2:51 PM

Gagosian Chelsea
I really should try to avoid the titillation of W 24th St’s master of the universe gallery, but in the case of John Chamberlain its like gawking at a car wreck, you just can’t look away.
Next thing you know his crumpled up car sculptures will be included in a Transformers sequel. (or perhaps the prequel) And that might not be such a bad thing, for this is fun art.
I think Chamberlain takes himself too seriously. His work would look great at a Six Flags park, or a NASCAR event, he would be an immediate populist hit. Crowds would gather, and rednecks would crave to become artists. Is that so wrong?
Entombed in the sterile high art environs of Larry’s Lair his efforts seem ho-hum, and trying too hard to impress. John, you’re just a junkyard dog at heart, don’t get all mega art market on us.
This is an artist who craves attention; using crushed sheet metal as gift-wrapping for celebrations of mashed up machismo machinery. These lyrically compacted monstrosities lurk innocently about, but get too close and you risk disillusionment. These sculptures are not about to whisper sweet nothings in your ear. They are indifferent and imperious, you wouldn’t want to try dancing with one.
Their ponderous scale doesn’t intimidate so much as invoke a kind of pity. You want to put your arm around one and try to console; don’t feel bad about being ungainly and overweight. At least you’re trying to be nice.
One of the best things about this exhibit is the video on the gallery web site. King John is plunked down on a directors chair in his wonderfully crammed Willy Wonka chocolate factory of a studio, surrounded by any weekend warriors dream of a tool shed, overseeing assembly (or shall we say reconfiguration) of his alter ego art.
I wish this guy had gotten into movies. If he’d gone with his cartoonish inclinations he would have made a more intellectually honest director then Schnabel, and certainly have been way more entertaining.
http://www.gagosian.com/exhibitions/2011-05-05_john-chamberlain/ 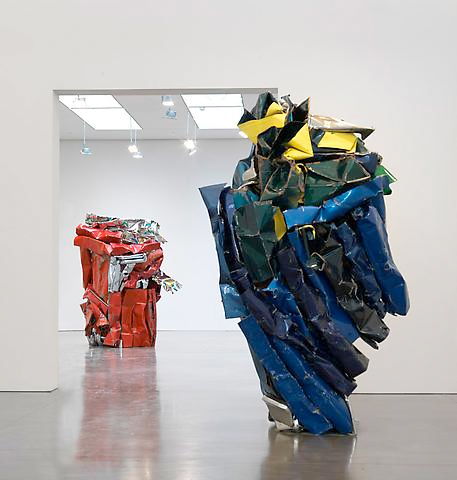 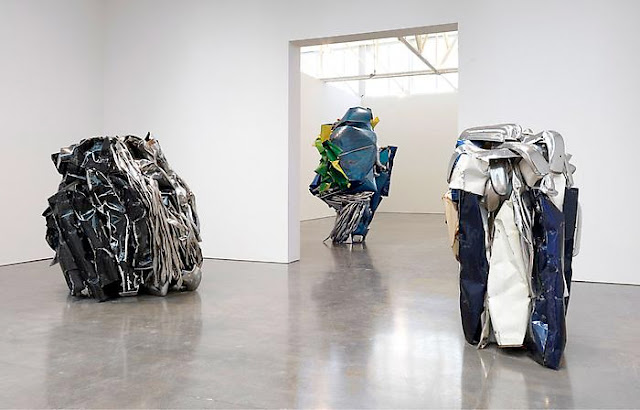 0 comments
Email ThisBlogThis!Share to TwitterShare to FacebookShare to Pinterest
Links to this post Posted by Eliot Markell at 2:42 PM

Beauty in every grain: For the first time remarkable photographs reveal hidden charms of ordinary SAND

"Viewed at a magnification of over 250 times real life, tiny grains of sand are shown to be delicate, colourful structures as unique as snowflakes.
When seen well beyond the limits of human eyesight, the miniature particles are exposed as fragments of crystals, spiral fragments of shells and crumbs of volcanic rock.
Professor Gary Greenberg who has a PhD in biomedical research from University College London said: 'It is incredible to think when you are walking on the beach you are standing on these tiny treasures". 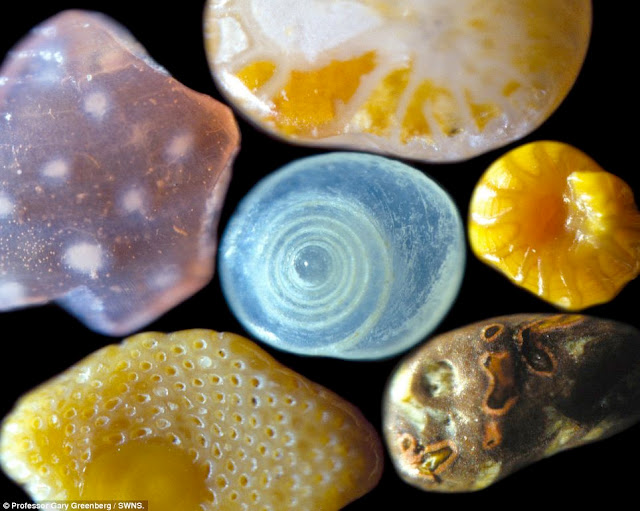 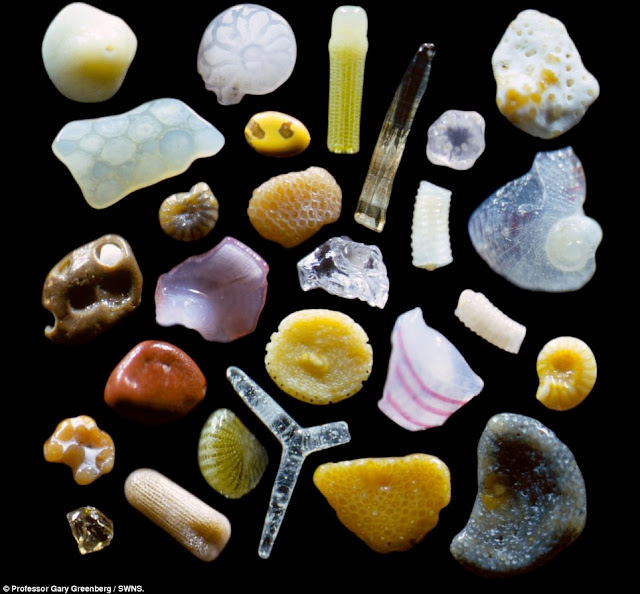 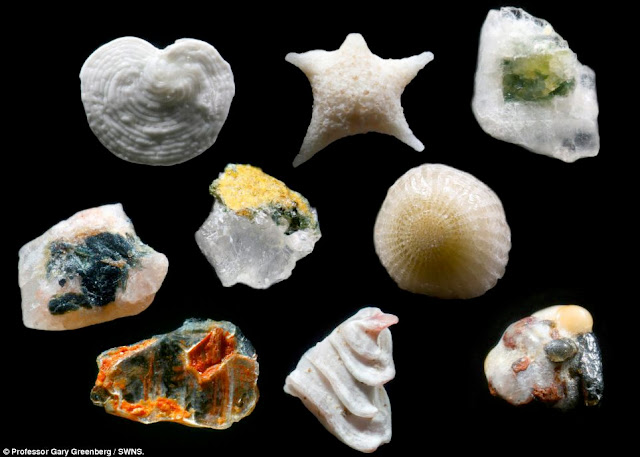 0 comments
Email ThisBlogThis!Share to TwitterShare to FacebookShare to Pinterest
Links to this post Posted by Eliot Markell at 2:34 PM

Before a packed crowd of more than 50 residents at a meeting sponsored by the Dean Street Block Association, Ms. Howard described how rats the size of cats had gotten into the engine of her car, a 2007 Camry, leaving behind chicken bones and aluminum foil, all the while chewing on the wires.
http://cityroom.blogs.nytimes.com/2011/06/24/in-brooklyn-the-rats-move-out-as-the-nets-move-in/?ref=nyregion