Cheim & Read
http://www.cheimread.com/exhibitions/2012-01-12_bill-jensen/?view=checklist#
Except for the fact that Jensen is represented by one of the top galleries on the planet, you might think that theres a cult following.
Somehow maintaining his stature as an indie painter in the eyes of his less fortunate art making admirers is something of an art world oddity, and has probably benefited a career that might not have flourished without that cache of reticent, working guy art star.
Ever since his tumble into the painted void at Mary Boone, Jensen’s exhibitions are always fraught with an air of trepidation and anticipation, what will this recalcitrant (at times) Brooklyn Bohemian, once a lowly art laborer just like you and me come up with next?
Part of the Jensen allure is an aura of mysterious identity. His elusive persona (coined “Bashful Bill” by videographer Loren Monk) is reflected in his use of furtive pigment that dissolves resolve right in front of our eyes. Appropriately, Jensen’s approach to painting is hard to discern, is he purposeful or passive, demonstrative or demure? Giving Jensen the benefit of any doubt I suppose we could say that his work has gone beyond the boundaries of physical purpose and presence to achieve a less densely structured and formal beauty.
Yet Jensen does expound (if not on camera) a proposition for his paintings that describe a filmic premise inspired by the greatest (I say this unabashedly) visual filmmaker of all time, Andrei Tarkovsky. Of course all painters should be inspired by Tarkovsky, (the most profound image maker since Rembrandt) but that Jensen should focus so intently on a filmmaker dedicated to saturating his celluloid in an enriched vision of the physical world’s earthy substance seems ironic. Perhaps Tarkovsky’s exalted command of the human condition is what interests Jensen more.
He sites more specifically Tarkovsky’s cautionary tale of the icon painter Andrei Rublev, an achingly grim, yet devastatingly beautiful narrative that might dissuade lesser art students from picking up a brush.
It may be a good thing that Jensen diverges from Tarkovsky’s stark literalism and lets his pigment disperse. Jensen’s work inhabits a nether region of interior immateriality, not celebrating the majesty of nature in the here and now, but optically describing the visceral remains of an otherworldly photographic process not quite completed.
His dark gestures of sinewy texture derive from palette knifing oil paint to exquisitely fine films of semi translucent layers. This seductively lovely process lures his art into a kind of trance-like monochromatic stasis. The artist’s love affair with ultramarine violet can get tiresome, and the flattened picture planes tend to become stretched and stressed out looking.
The large black and white, neo-Dubuffet works are the clunkers of the show. These unfinished looking slabs of concrete crevasses should have been left in the studio. Its possible that eventually they could have been transformed but now seem a lost cause. Jensen has always needed help choosing what to show. Why the gallery hasn’t been more assertive I don’t know.
But technical intent and results don’t seem to be what motivates Jensen. My favorite piece in the exhibit “Oracle Bones III” is a small messy looking canvas that reeks with a wonderfully ancient patina. Innocuous though it may seem, this is painting incarnate. A softly radiating lumination emanates a Gustonian essence. Sloppily applied drips detail a nuanced history of paint covering paint. This bit of archeological excavation reveals a vessel transported through a sense of history, mummified by medium and chroma.
Jensen’s conundrum of process resisting pictorial stability tends to try the eye. Not that painting has to please and soothe, but pictorial integrity requires internal coherence. Substance results from a foundation built on patience and perseverance. Jensen has an extraordinary ability to compose rapturously intuitive narratives that sing to us in color and form, but mostly his stories have no plot, beginning, or ending.

1 comments
Email ThisBlogThis!Share to TwitterShare to FacebookShare to Pinterest
Links to this post Posted by Eliot Markell at 6:45 PM

HIDE/SEEK: Difference and Desire in American Portraiture, The Brooklyn Museum.
http://www.brooklynmuseum.org/exhibitions/hide_seek/#
OK, I know the Brooklyn Museum is a bastion of fashionably controversial, culturally conspicuous consumerism, but all the narcissistic strutting and posing on display (including the viewing audience, there was quite a fabulous crowd in attendance) at Hide and Seek distracted me from an intriguing premise; the transition of homosexual artistic identity from chaste Victorian to the  Calvin Klein tidy whitey & chains crowd.
And therein lies the dilemma of an exhibit themed on the liberation of gender identity. Landscape art, abstract art, and even pop art, all made art for arts sake. But I tend to get suspicious when ulterior motives like gender empowerment enter into the equation. Things always seem to get polemic and stratified, losing sight of artistic craft and process.
However unlike selections of feminist art from the same period, some of the more contrived contemporary work in H&S is plagued not so much by political rhetoric, as a kind of preening slave-to-fashion obsequiousness.
One particularly heavy-handed use of metaphor was Lyle Ashton Harris’s life sized self-portrait French kissing his brother while holding a menacing looking pistol to his sibling’s chest. C’mon, I get it already, firearm as sexual innuendo, powerlessness vs penetration, offend the religious right, etc. Thanks so much for cramming it all down my throat. (just kidding)
Haven’t we seen enough over-sized, super glossy C-Prints of shockingly sensational homo-erotica in Chelsea already?
Whats most revealing about this exhibit is how completely and radically homosexuality has transformed its expression in visual art from the repressed, but exquisitely refined libido of Grant Wood’s preppy looking “Arnold Comes of Age” to a morbid yet compelling drama of Canadian AA Bronson’s death bed portrait of his partner.
David Wojnarowicz’s (WANA-row-vitch) paintings aren’t seen to full effect in this exhibit, but his video “Fire In My Belly” which put H&S on the map when it was removed from the National Portrait Gallery exhibit in Wash DC has gained this exhibit more notoriety than it deserves.
The video itself could only be considered offensive to those overly sensitive and intolerant mullahs and saints populating the halls of congress. In fact, Fire In My Belly is an effective piece of visual poetry, and relates to Wojnarowicz’s strong skills as a painter.
Mapplethorpe’s semi crucified self-portrait cheerfully greets the viewer. His exquisitely demented porno gleefully transcends the medium of S&M, gaily proceeding to wickedly witty compositions rooted in personality and grace.
There are enlightening gems here; Grant Wood’s portrait of his mother  “Women with Plants” contains a wispy, almost windblown brushiness, contrasted by her craggy visage.
Florine Stetthiemer’s ghostly and solemn portrait of Duchamp belies her flamboyantly theatrical fantasy stage scenes.
Lee Miller’s dreamlike shot of Joseph Cornell superimposed with toy sailboat, lends a Freudian chiaroscuro to this serene scene.
But some things are better when left behind the closet doors, and Hide & Seek could have stood to hide a little bit more. That the sublime and substantial work in this show derives mostly from libidos disguised and camouflaged, rather than the uninhibited acting out of glaringly explicit decadence run amok, seems to indicate that gender for genders sake became a means to an end here.
Ultimately then, and ironically enough, art that’s all about sexual orientation tends to imitate life, and not very convincingly at that.

0 comments
Email ThisBlogThis!Share to TwitterShare to FacebookShare to Pinterest
Links to this post Posted by Eliot Markell at 6:02 PM

1945 Directed by Fritz Lang, with Edward G Robinson & Joan Bennett
The moral of the story for all those careerist art types is to be careful what you wish for. Especially if a connivingly seductive Joan Bennett takes all the credit for painting your canvases.
This cautionary film noir casts E G Robinson in the unlikely role of Chris Cross (!) an unassuming bank bookkeeper turned outsider artist at night. Lured by a duo of truly rotten and duplicitous con persons (Bennett & Dan Duryea) to give up his paintings for the promise of big bucks and gallery shows, things go from bad to worse as Chris’s crush on Kitty (Bennett) turns violent.
Lang’s expressionist take on film noir cinematography and screenplay lends an unusual pathos to this story. Gritty and believable characters struggle for survival, while haunted by their actions. Theres nothing heroic or redemptive about Chris, he’s sold out and now must pay his dues.
At least the art has a happy ending. 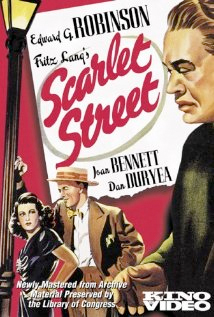