Richard Serra Drawing: A Retrospective
Metropolitan Museum
Good old adorable Richard Serra, cute as a button, whats not to like?
Well, according to the artist during his 2008 interview in the Guardian: “I don't give a shit but I care quite a lot.”
So where does that leave his befuddled but adoring public art aficionados? Perhaps admiring substantial works on paper with titles such as: “US Courts Partial to Government” and “The United States Government Destroys Art”. These typically monolithic concepts allude to the artist’s controversial public art fiascos in New York and California, and his reputation for grouchy, left-leaning proclamations.
Something tells me this guy has a really big heavy chip on his shoulder. But good for him, he’s proven he can take it, and with his “revenge drawings” it’s been best served Xtra Large.
Serra’s humorless, monumental obstructions, dominating and oppositionally defiant, still manage to convey the artist’s touch, and this long over due exhibit of his works (mostly) on paper gives us a sense of Serra’s funkier side.
Patina is the heart and soul of Serra’s art, the softer side of the iron man. The “Forged Drawings” series exemplify the fortitude of matter, while entropic decay (rust) seduces the flesh. The slightly sweet whiff of Ivory Black entices us with the possibility of undulation. The potential for malleability however remote, draws us in, while simultaneously, resolutely stolid object-ness commands authority, rebuffing any flirtation with delight.
The “Forged Drawings” are as intimate as Serra has ever become, approaching radiance despite their immense gravity and gooey coats of paint stick.
The “out-of-round” group of works on handmade paper starts to suggest post war painting outside the minimalist constrictions of monochromatic flatness. These pulsating black holes stuffed with fermenting black carbon exude a painterly mess; much the way Pollack espoused splashy whippets of untamed pigment.
The larger scale works on linen from the ‘70s, such as “Abstract Slavery” are stapled to the wall in a causal looking manner, most likely as they were in the studio. They are attached to the wall slightly off kilter, skewing our reference to “square” and setting a nice perceptual shift in motion. This is one of Serra’s keys to keeping such formidable work from becoming too static.
Calling the artist a minimalist becomes a misnomer. Serra’s work is really all about maximalism. His blackened blank screens are primed for total absorption of all mass, light, and sensation. They contain everything and nothing.
Although ego driven his work always denies personality, a totalitarian polemic guides the artist’s process. This is art deprived of spontaneity, and improvisation but rich in grandeur and architecture.
His formalist zeal for rigidity and manifesto constantly reminds us that theres little room for dissent, its Serra’s way or the highway.
http://www.metmuseum.org/special/se_event.asp?OccurrenceId={2C49726E-A17C-428D-A97C-60552A47D829}
http://minimalexposition.blogspot.com/2009/06/richard-serra-forged-drawings-minimal.html
http://www.guardian.co.uk/artanddesign/2008/oct/05/serra.art

0 comments
Email ThisBlogThis!Share to TwitterShare to FacebookShare to Pinterest
Links to this post Posted by Eliot Markell at 3:14 PM

Reconfiguring an African Icon: Odes to the Mask by Modern and Contemporary Artists from Three Continents

Metropolitan Museum of Art
What a racket!
At least according to the title of Romuald Hazoume’s street-smart sculpture “Ear Splitting”.
I’d have to agree; this eccentric collection of contemporary sculpture by both African and American artists is a noisy, rambunctious gang of aggressively tough looking assemblages.
This exhibit expounds on how traditional African masks, meant to establish tribal, social and spiritual hierarchies, has influenced contemporary art rooted in a low-tech, scavenger ethos.
The objects here have reinvented the original African context of primitively hand-carved wooden art that invoked magic, divination, and shamanism, into a glowering group of facial symmetries fabricated from junked plastic jerricans, discarded electronica, and metallic roadside detritus that conjure up a post apocalyptic, mad max-ian aesthetic.
The two contemporary African artists in this exhibit are both from the West African republic of Benin. The exhibit seems to extend out from an indigenous Beninese spiritual practice called Vodun, which conveniently morphs into visual art much the way Voodoo imbues artificial figurines with a literal connection to deities and psychic weaponry.
Calixte Dakpogan’s piece “Perroquet” (Parrot) is a tautly economical gesture of great expression. This mechanical bird head’s stunning simplicity of form is generated by craftsmanship of the highest order. This is has it should be.
Dakopogan, his brother and a cousin run a metalsmithing shop in Porto Novo going back generations. They are devoted to Ogun, the god of iron (and junked auto carcasses) that litter the highways and byways of this former slave trading port.
This dedication to rusted remnants recovered, and then rediscovered lends wit, irony, and a scrappy originality to a found art tradition that thrives on third world frugality.
An American artist in this show, Willie Cole, brings his forebodingly bristling headdress “Shine” to prominence in the exhibit. Based on tribal styles that feature intimidating and protruding appendages, his use of black leather high heel shoes spikes the artwork with a fetishistic slant.
“Next Kent Tji Wara” then spins us on our heels. A pink bicycle frame has been twisted and turned into a gracefully posed antelope, poised to leap. Cole’s ingenious use of unexpected sculptural fodder dovetails beautifully with what you thought the curators intended for this installation.
So I’m not exactly clear what the Benglis pieces are doing here. (the cynical side of me might even think the curators thought a sexy name was needed) This well-known art star seems incongruously out of place. Especially when presenting blown glass, a highly risky medium that always makes me cringe, and form associations with the preciously pretty.
http://www.metmuseum.org/special/african_icon/images.asp
http://www.caacart.com/pigozzi-artist.php?i=Dakpogan-Calixte&bio=en&m=42

0 comments
Email ThisBlogThis!Share to TwitterShare to FacebookShare to Pinterest
Links to this post Posted by Eliot Markell at 3:08 PM

Paul Klee: Silence of the Angel

A documentary by Michael Gaumnitz
Available on Netflix
“Prehistory of the visible”, this quote from Klee goes a long way towards encapsulating the understated majesty of this artist’s intuitive prowess.
Although this documentary leans heavily on Klee’s prodigious theoretical and literary capabilities, it’s his formidable draftsmanship skills coupled with an uncanny sense of chromatic harmony that lend themselves so beautifully to the filmic medium.
This well crafted recounting of Klee’s personal, professional, and psychic relationships draws few conclusions on it’s own, but leads us to consider the implications of Klee’s obsessive adherence to detail in his art and note taking, while conveying the intricacy of musical balance, and delicacy of composition that unfold out of a precognitive instinct.
Klee’s observation that “the eye examines the surface like a grazing animal” seems to encourage us to see without searching and to avoid the visual preconditions that inhibit an unencumbered response to unfamiliar symbols.
The inherent dichotomy in Klee’s work of theoretical construct, engineered improvisation and freeform, neo-painterly mark making combine to achieve his sublime sense of equilibrium. The film succinctly exploits this essence of the artist’s process by detailing some of Klee’s tightrope images; metaphors extraordinaire for a balancing act par excellence.
Following Klee’s all too short lifeline, it becomes astounding how prodigious this artist was. Exiled from Nazi Germany as one of the “degenerates” he spent his last days in Switzerland entertaining the likes of Picasso and Kandinsky, and turning out some of his most profound, but humble work. His series of  “Angel” sketches stem from line drawings of ethereal, child-like simplicity. They fulfill a lifetime of studiously diligent yet exalted picture making that stimulate our visual cortex with fantastically impossible phantasmagoria.
http://www.youtube.com/watch?v=uGy0R5X8oEo 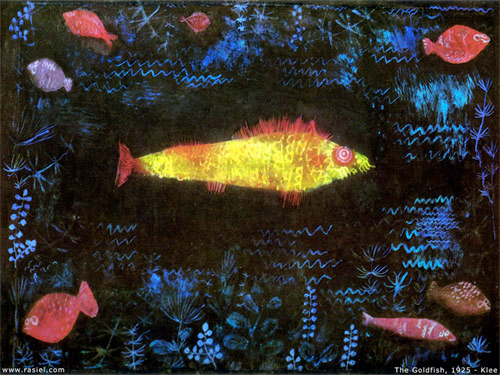 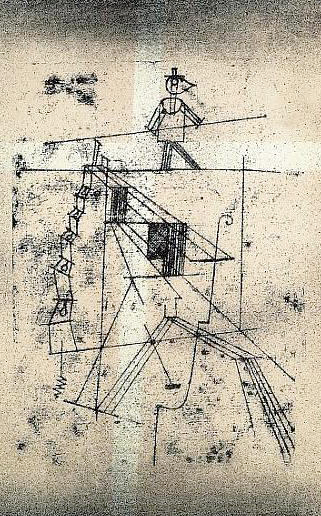 0 comments
Email ThisBlogThis!Share to TwitterShare to FacebookShare to Pinterest
Links to this post Posted by Eliot Markell at 2:58 PM

Screened at Roof Top Films.
This delightfully daffy bit of German comedy centers on confusion surrounding a birthday and a trumpet for a gift.
The ending provides an unusual Dixieland sojourn through the Bavarian Alps.
http://www.europeanfilmfest.org/index.php?option=com_k2&view=item&id=21:its-me-helmut&Itemid=56 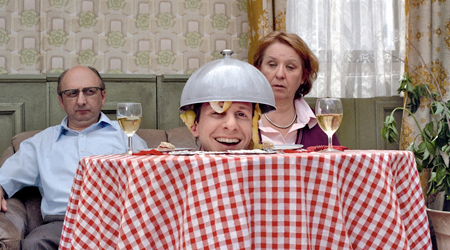 0 comments
Email ThisBlogThis!Share to TwitterShare to FacebookShare to Pinterest
Links to this post Posted by Eliot Markell at 2:49 PM

I’m only including this for the gratuitous shock value and maybe to bring in some more page views.
Warning: not for the squeamish!
http://gothamist.com/2011/08/25/brooklyn_man_stabs_giant_rat_with_p.php