Matta: A Centennial Celebration, on the occasion of the one-hundredth anniversary of Matta’s birth.
Pace Gallery Chelsea 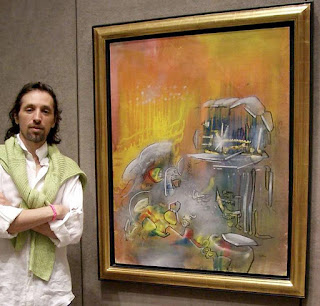 Conundrums abound in this overtly zealous painter’s manic space, but you can’t accuse him of not trying, like Gorky he let it all hang out.
Matta’s Surrealist origins shape a lifetime of mostly hectic, unfussy canvases that contain cogently conceived contemplations, urgently constructed.
Leaving his native Chile for Paris in 1933 he hung with André Breton and became the youngest member of the Surrealist circle.  A literalism creeps into this early work, but Matta’s playful nature (which becomes an important saving grace during a long, industrious career) invigorates cubist doctrine and design.
After moving to NY at the beginning of WW2, he quickly joins the burgeoning Abstract Expressionist scene and connects with Gorky’s quirky synaptic painterly rhythms. Matta’s  “inscapes” and his “psychological morphologies” are inherently indebted to Gorky. Matta repays this kinship by having an affair with Gorky’s wife, (to be fair Gorky was suffering horribly at his time from cancer, depression, and a studio fire that wiped out some important work, he must not have been much fun to be around) and is excommunicated from Surrealist society.
Moving back to Europe for the rest of his life, Matta launches into a prodigious output of paintings inspired by socially relevant issues and technological phantasmagoria.
His mid century scheme features a modernist sensibility manifesting as an obsession with goofy, apocalyptic visions of techno sci-fi dilemmas run amok.  The most spectacular visages are spread out in a mural-like format of an extended rectangle. This provides us with a left-to-right narrative read that repeats itself a bit too much. The semiotics can get a tad predictable, even if his use of vivid pigments saves the day.
Figurative references abound in these epic compositions. Elastic, skeletal forms extend stretched out limbs that integrate a casual architecture. This zesty Mad Magazine cartoon-esque figuration succinctly anticipates graffiti.
Matta’s strengths as a painter are apparent; his expansive spatial atmospheres, and chromatic saturation are applied with a delicate airbrushed finesse, and achieve a sublime pastel fragrance. But the confluence of flatness and a murky palette at times lead to uncertainty of intent. He seems to lose focus easily, compositions can strive for harmony and end up a-tonal and off key. Excessive reliance on scratchy, hasty looking drawing weighs down already clunky and tentative cacophonies that for all the excited mark making end up static and slightly stale. With Matta sometimes you have to pick and choose to find the rewards.
Then seen to be surging from some orchestral wellspring of momentous seismic activity, a gargantuan canvas like “L’Homme Descend Du Signe” goes rocketing towards an electro-mechanical nirvana, exuding a violet haze enveloping free-floating sections of disjointedly animated creatures.
This cosmic theater evokes sweeping cinematic vistas of space age paraphernalia that entertain notions of wit and whim. We know the painter was having fun and so are we. 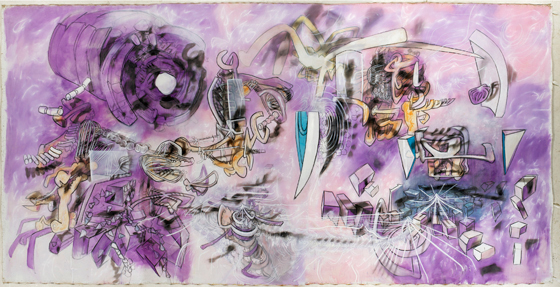 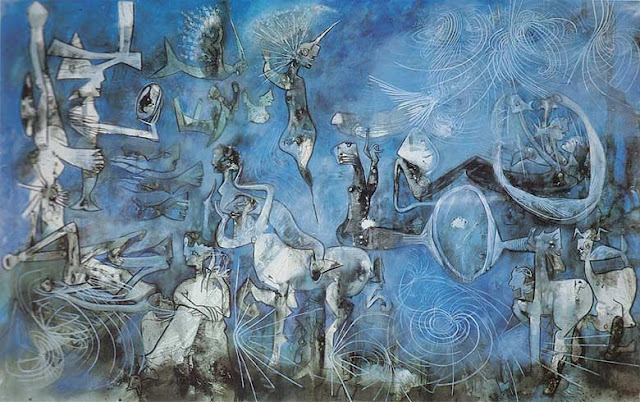 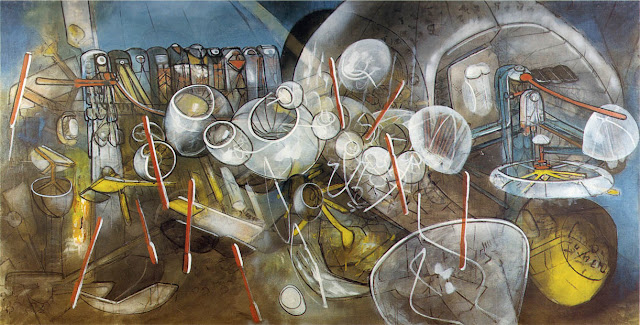 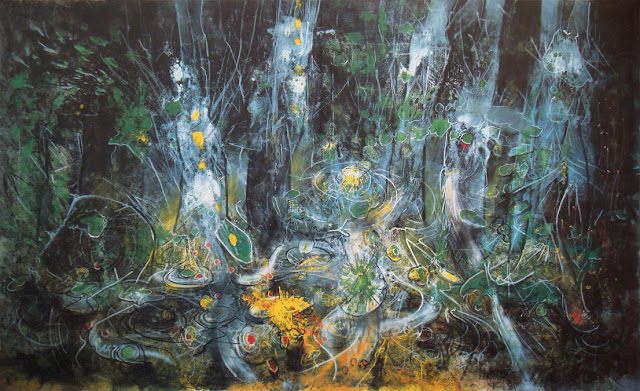 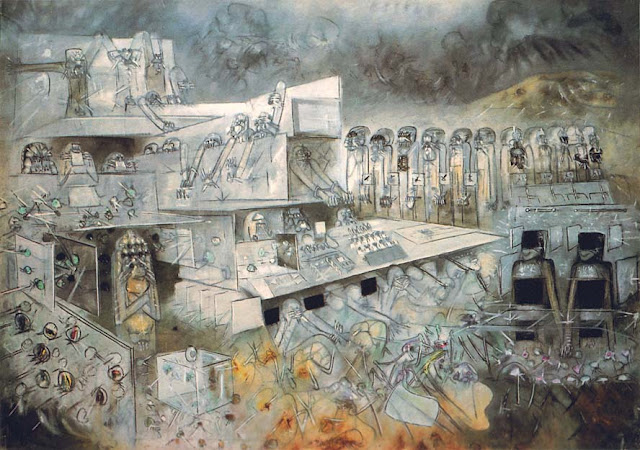 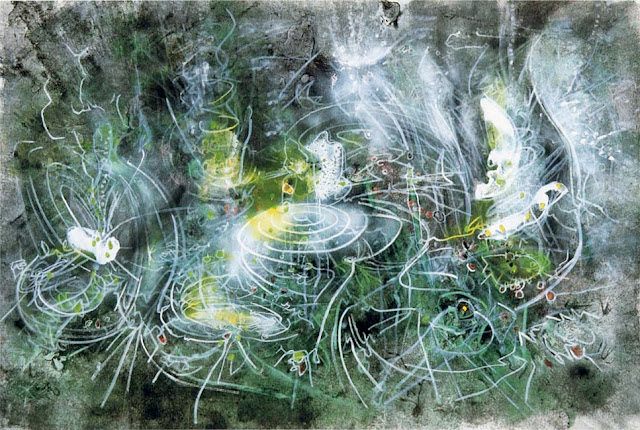 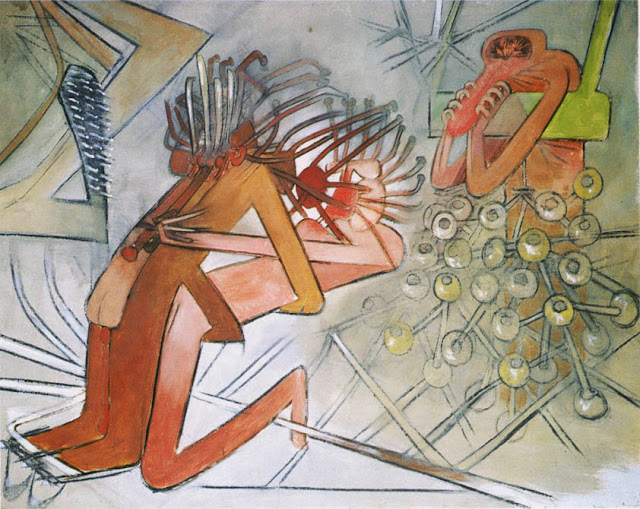 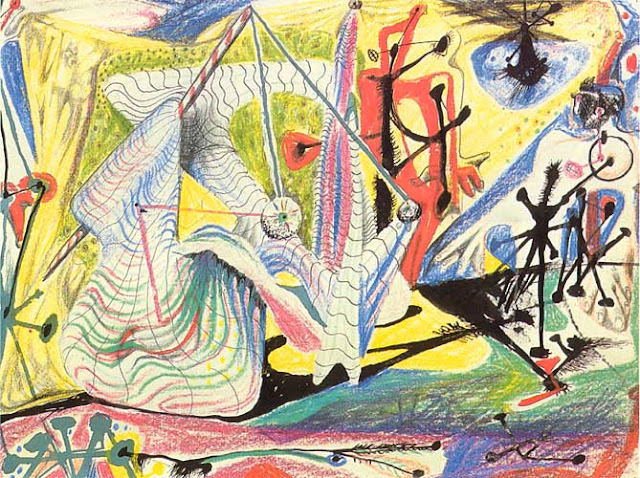 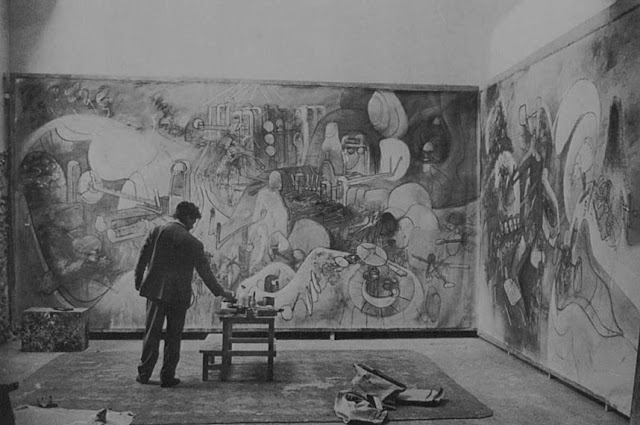 Matta in his studio.

0 comments
Email ThisBlogThis!Share to TwitterShare to FacebookShare to Pinterest
Links to this post Posted by Eliot Markell at 7:49 PM

Sideshow Gallery, Williamsburg Brooklyn
Tom Evans and Sideshow go together like a horse and carriage. Tom being a workhorse of a painter, and Sideshow his old school vehicle rattling along on its wooden wheels, displaying these painterly wares for the all the village to see.
Not that Evans is old fashioned, just out of fashion, which makes me appreciate his new work even more.
This vivid stew of neon luminescence ignites a visual fuse, and detonates before our eyes. This is action painting incarnate, tumbling scrums of acrobatic color fields wrestle each other to the floor (or perhaps the foreground) and emerge victorious in most of these boisterous canvases.
Evans says he was feeling “kicked out of painting”, and decided to get rid of some older works that were over cooked and burdening his oeuvre. He put many of his past efforts out on the curb for collection and started anew. This is a good sign, real painters always rid themselves of perceived clunkers. The last thing you want to do when rooting through your storage racks is continually remind yourself of how hard it is to learn how to paint.
However Evans has mined his previous wealth of art making expertise here, superseding flatness by draping sections of the picture plane with flecked patches of textured brushwork that connotes patterned animal pelts.
Although Evans did not waste any time with these paintings, they still accumulate a certain gravity that helps balance out the struggle for pictorial integrity that all authentic painters strive for.
These untamed riffs of muscular abstract activity promulgate physicality in the here and now, while refreshing our aesthetic senses with their unpretentious artistic vigor. 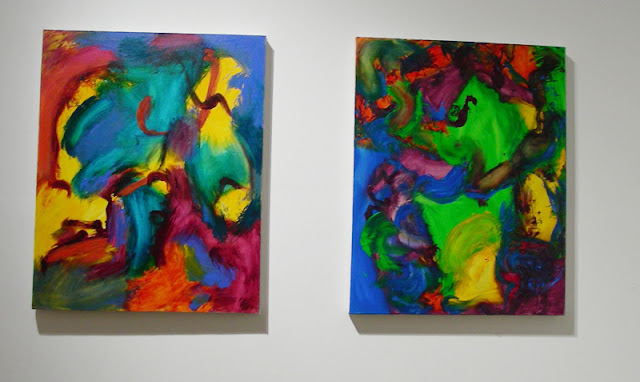 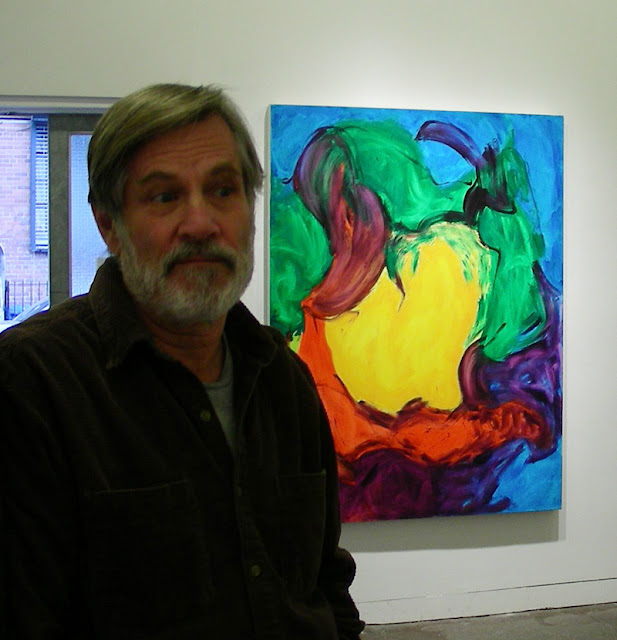 0 comments
Email ThisBlogThis!Share to TwitterShare to FacebookShare to Pinterest
Links to this post Posted by Eliot Markell at 7:39 PM

Streaming Festival 6th Edition at The Hague, Netherlands
http://www.streamingfestival.com/archive/2011/artists.php?id=1047&f=Eva&l=Lee
Just think, 20 years ago when we were all still so analogue Eva Lee’s ode to nature could not have been seen. I don’t think she would have tried to paint this short lyrical sonnet using Old Holland, it really could only have taken form on a digital canvas.
But it is at heart a painting, and a pleasant one to look at.
The opening passage fades in to a shimmering black & white pool of shifting amoeba that could also represent a map of cosmic background radiation. Crackling on the soundtrack lends a primal quality to the scene. The interaction between the macro and the micro pervades this work and instigates a crisp visual dialogue.
Undulating kaleidoscopic orbs inflate and deflate in a very Hippie Trippy hallucinogenic manner. This ironic throwback reference is but one interpretation, the eye-catching yellow green chroma could intuit backlit stained glass or insect patterning.
Kudos to Ms Lee for a clever digital age reinvention of the painterly craft. Dick Blick should take notice!

0 comments
Email ThisBlogThis!Share to TwitterShare to FacebookShare to Pinterest
Links to this post Posted by Eliot Markell at 7:33 PM

A sort of anti-art fair, the Degenerate Craft Fair features over 75 artists, designers and their work. Just in time for holiday shopping, most of the items offered will cost less than $50.
http://degeneratecraftfair.com/
Jeanne and I will be there, hosting a rare live appearance of “Ray & Dawn, The Astronuts”.
Ray and Dawn will provide personally autographed copies of their famous “Moonwalk By Earthlight” photos for a nominal fee. (considering the astronomical expense of getting them to the moon and back)
We hope to see you there.
Eliot & Jeanne 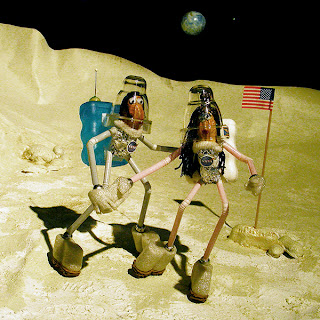 0 comments
Email ThisBlogThis!Share to TwitterShare to FacebookShare to Pinterest
Links to this post Posted by Eliot Markell at 7:28 PM


Check out this amazing computer animation flyover of the 9/11 monument:
http://www.friendsseminary.org/podium/default.aspx?t=204&nid=738873