I’d like to think Bushwick will end up spawning creative talent identified as part of a particular time and place. The Bushwick scene has been primarily a youth movement, which I see as vital to the continuity of contemporary visual art, and historically as a connection to previous art communities.
I’d hope that Bienvenu’s early artistic identity will always be linked to the ungentrified origins of Bushwick’s burgeoning crowd of rambunctious rebels.
Bienvenu’s bad boy pictorial antics helped land him some notoriety, but those paintings are also some of his most convincing work.  Poking fun at pop culture porno relieves the artist from over-burdening his canvases with excess sentiment. The artist’s most pressing concern in these paintings is that they not be taken too seriously. 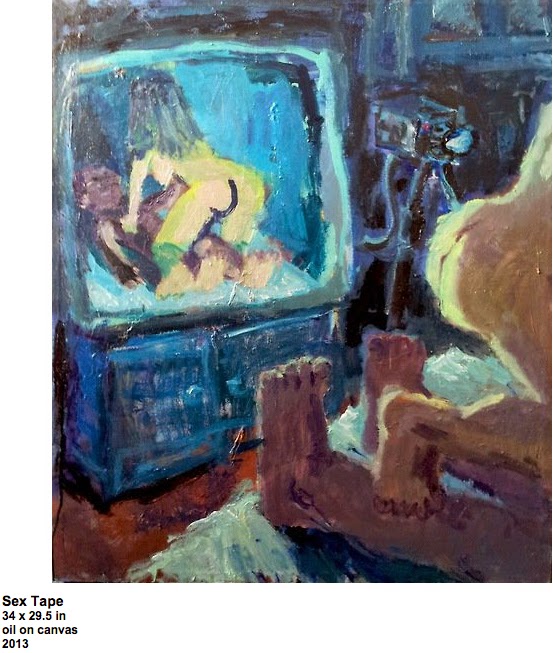 Bienvenu’s use of iconography serves his instinct for layered texture nicely. The painting “Talking About Abstract Painting” with a skull and caption bubble, delves into a nihilistic nether region of scraping and over-painting, expressing an intuitive warning of some impending psychic calamity.


The painted works on paper sustain the artist’s ability to isolate and magnify moments of painterly prowess. These succinct, off-the-cuff gestures could be frames from some outré comic strip.
Bienvenu’s more ambitious, larger scale works vacillate from tour-de-force, to less complete manifestations. I find his key to resolution rooted in texture and physicality.
The condensed architecture seen in “Perspective” contains a neo-abstract grid of loosely sketched facial symmetries. It’s like looking at ten Basquiat’s stacked in a pile. This no-holds-barred conglomeration is actually a highly refined process of improvisational mark making, resulting in a visual synthesis of pigmented tapestry.

The artist can get a bit carried away by his rock concert conceit, indulging in acrobatic maneuvers that can come off as a little flat. But when textured nuance takes priority, he becomes more of a painter, and less of a raconteur.
Yet narrative content is a crucial aspect of Bienvenu’s figurative inclinations. Whether a vulgar reference to a sex act, or a sociological documentation of tattooed biker trailer trash, the artist usually has a story to relate. 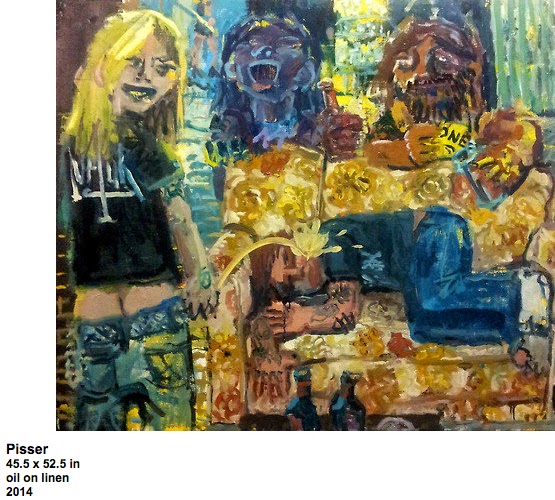 However they are not morality tales, and despite his enthusiastic renditions, Bienvenu does not cast judgment. He likes to watch. His powers of observation, supported by a savvy grasp of R Crumb-like illustration, are abetted by his knack for painting theatrically constructed compositions. He paints dramatic moments in progress. This might be considered a new version of New York action painting, via Southern Culture On The Skids.
https://www.youtube.com/watch?v=KUP5rwVNJko
I like that the artist has worked through his influences of decadent Beckman and ironic Crumb, et al, while managing to sustain his youthful exuberance. This work provides a respectful nod to historical references, and then quite literally gives us a joyful finger. 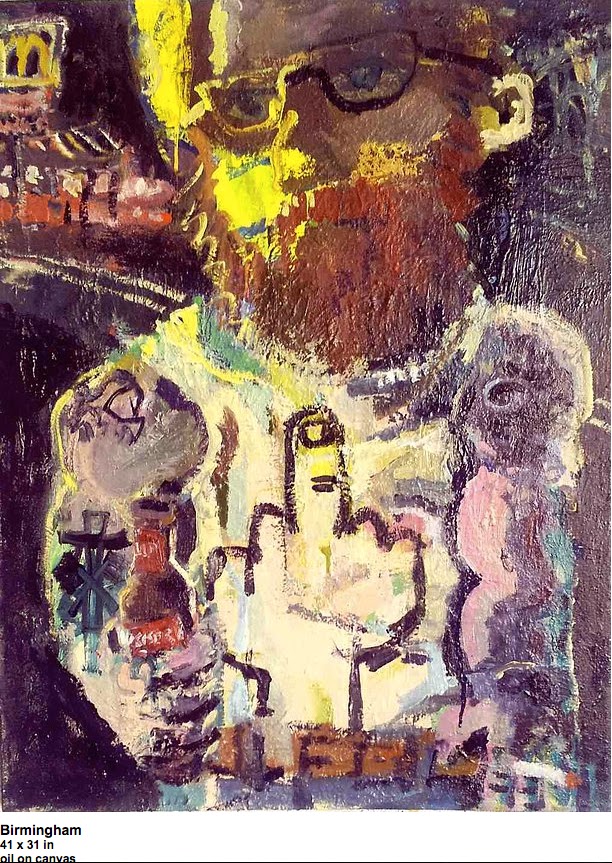 Email ThisBlogThis!Share to TwitterShare to FacebookShare to Pinterest
Posted by Eliot Markell at 10:48 PM